The HVAC Coalition provided an update on the proceedings with the Ontario Energy Board (OEB) regarding the Enbridge Gas Open Bill Access (OBA) service. The hearing is this week. 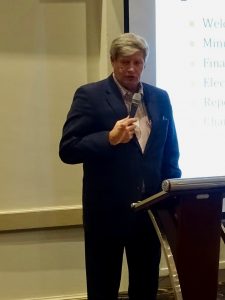 The January meeting of HRAI’s GTA Chapter, held Tuesday, January 28, included news from the HRAI head office along with the annual general meeting proceedings and an update from the HVAC Coalition.

Led by Martin Luymes, HRAI vice president, government and stakeholder relations, the HRAI update focused on government relations activities, noting the advocacy team is growing and placing more emphasis on being proactive with all levels of government and taking steps to promote more member engagement in the process.

Luymes introduced Bruce Farquhar, the most recent addition to the advocacy team. Based in Ottawa, Farquhar will focus on manufacturer relations, including the harmonization of U.S. cross border and interprovincial regulations, among other issues.

The team has also expanded with the introduction of part-time advocacy champions in B.C. and Quebec.

Dorothy McCabe, government relations specialist in Ontario, on the job for six months, walked attendees through recent engagement activities including an MOU with the Ontario Refrigeration and Air Conditioning Contractors Association (ORAC) to strengthen the industry’s voice at the table. On the engagement front, McCabe also announced an upcoming Queens Park Day being arranged for March 4 to encourage members to bring HRAI messaging directly to MPPs.

In a brief update on HRAI educational programming, Angie Mantei, manager education delivery, outlined the updated residential ventilation design courses which include an online module, part of HRAI’s new learning management system platform that will be rolling out more programs in the months to come.

The HVAC Coalition annual general meeting, led by Roger Grochmal, president of AtlasCare and outgoing chair of the Coalition, concluded with an update on the proceedings with the Ontario Energy Board (OEB) regarding the Enbridge Gas Open Bill Access (OBA) service which allows third-parties to access Enbridge Gas’ bill for a fee to bill for services and provide marketing information.

The HVAC Coalition, which serves as an industry watchdog, has been an active voice in the proceedings, advocating most recently with respect to two outstanding consumer protection related measures that remain to be settled: what control should customers have over the addition, removal and reinstatement of third-party charges on their Enbridge Gas bill through the OBA services?; and what restrictions, if any, should be placed on billing customers for penalties, exit or termination fees or similar charges through the Enbridge Gas bill?