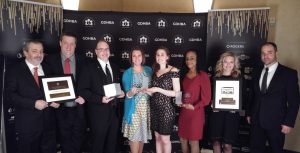 Association members vote for Trade Partner of the Year.

Hy-Mark’s president, Robert Dewar, was presented with two awards at the ceremony: the Rooftopper Award and Executive Officers Award, presented to one board member annually.

Dewar, a board member and second vice president of the association, won the Rooftopper award for his recruitment efforts for the GDHBA.

In January 2018, Hy-Mark chaired and presented “Industry and Product Night” which raised over $27K for the association, according to Hy-Mark. www.hy-mark.ca