The total value of investment in building construction increased 9.2% to $59.7 billion in the first quarter of 2022. 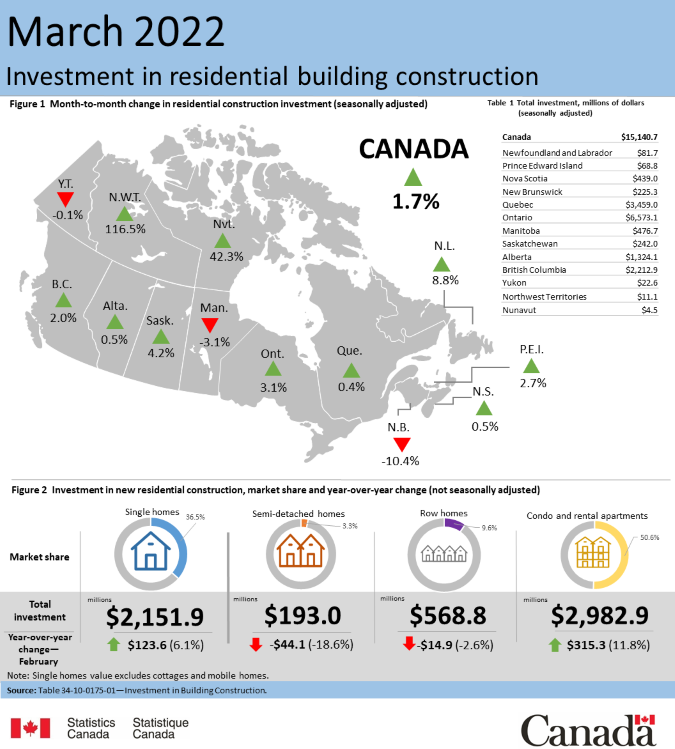 Statistics Canada has announced investment in building construction increased by 1.8% to $20.3 billion in March.  Gains were reported in both the residential (+1.7%) and the non-residential (+2.0%) sectors.

Continuing to rise was residential construction investment which saw a sixth consecutive increase, up 1.7% to $15.1 billion. Ontario played a large part in this, contributing about three-quarters of the monthly increase, bringing the national total to just below the record high reached in April 2021.

Multi-unit construction investment decreased 1.4% to $6.7 billion in March. This ended five months of consecutive growth for the component, as declines in six provinces more than offset the strong gains reported in British Columbia (+3.8%).

Investment in the non-residential construction sector was up 2.0% in March compared with February, a ninth consecutive monthly increase. Quebec accounted for more than half of the gain in March.

Commercial investment gained 2.4% to $2.9 billion. All provinces reported growth, led by Quebec (+6.7%). A retail development in Mount Royal, Quebec was the largest contributor to the increase in this component.

Investment in industrial construction increased 1.9% to $910 million, with Ontario (+2.6%) and Quebec (+2.7%) contributing to the majority of the gains in March.

Institutional investment rose 1.1% to $1.4 billion in March, its third consecutive month of growth. Much of the increase in March reflected the early stages of a hospital project in Québec City.

First quarter of 2022 in review

Residential investment in the single-unit component rose 11.2% for the quarter to $24.2 billion, with Ontario (+12.6%) accounting for half of the quarterly change. The multi-unit component was up 10.9% with all provinces, except Saskatchewan, reporting growth compared with the fourth quarter of 2021.

Investment in the non-residential sector was up 4.3%, with all its sub-components increasing compared with the fourth quarter of 2021. The commercial component, which contributed the most to the non-residential sector, gained 5.1% to $8.5 billion, its fifth consecutive quarterly growth. Investments in the industrial component increased 6.1% to $2.7 billion, while the institutional component rose 1.5% to $4.1 billion.