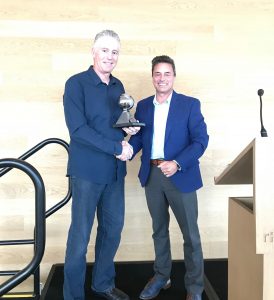 Larry Gill, manager of codes and standards at Ipex Inc, is the eighteenth recipient of the Canadian Institute of Plumbing and Heating (CIPH) Joseph K. Seidner Award.

In recognition of his contributions to Canadian plumbing codes and standards, Gill was presented the award at the annual Canadian Advisory Council on Plumbing meeting in Saskatoon, SK.

Gill sits on multiple committees, including CSA B128, B602, B55, B1800, B70 and B137. He previously worked as a project manager in the plumbing, welding and windows programs at CSA.

The Joseph K. Seidner award was established in 2000 by the CIPH board of directors in honour of its namesake, who passed away in 2003. www.ciph.com