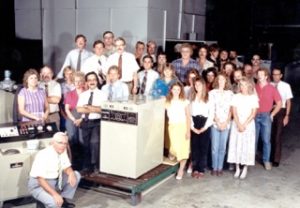 The 1986 Lochinvar team with the original Power-Fin.

Tennessee-based Lochinvar, LLC is celebrating the 30th anniversary of its industry-changing Power-Fin product line this July. Developed in 1986 from Lochinvar pioneer William Vallett Sr.’s vision for a high-efficiency water heater and boiler, the Power-Fin product was the first of its kind.

“As a company, we are proud to celebrate the 30th anniversary of the Power-Fin product line. This product line transformed the industry and elevated Lochinvar into a leadership position,” said Mike Lahti, vice president of sales, marketing and business development. “Our industry has seen a lot of change over the last 30 years, and at the time of its introduction, the Power-Fin product established a new standard of performance and design.”

The Power-Fin product was the first of its kind and offered four original models, ranging from 250,000 to 1,000,000 Btuh. It satisfied an industry hungry for high efficiency products. The commercial product line featured direct vent sealed combustion technology; a self-diagnostic, removable panel; multiple venting options; a copper-finned, vertical heat exchanger; and low-mass with a small footprint. It was able to fit through a 36-inch door.

“Starting with the Power-Fin product line in 1986, we were able to provide something that other companies weren’t focused on, efficiency and footprint,” says Dan Sheko, national sales manager. “Now, 30 years later, we are proud to have continued that tradition and provide some of the highest efficiency products on the market.”

“The Power-Fin products created consumer demand and acted as a catalyst for the company’s growth in the 80s and 90s which prompted the move to our state-of-the-art new headquarters in 2001,” says William Vallett, Jr., chief executive officer. “Lochinvar’s leadership position in the commercial water heater and boiler business was rooted in the success of the Power-Fin product line.”

At the time of its creation, Lochinvar had approximately 30 employees, four of whom are still with the company. Lochinvar currently employs 555 people.