The boiler's flue grommet can deteriorate and dislodge during use, and allow the boiler to emit carbon monoxide, posing a risk of carbon monoxide poisoning.

The recalled units contain a silicone flue grommet which is fitted through a small hole in the flue pipe and seals and holds a temperature sensor to the flue pipe.

Over time, it may be possible for the silicone material to break down and fall from the mounting hole in the flue pipe. If this occurs, the vacant mounting hole allows flue gases to escape, posing a risk of exposure to carbon monoxide. 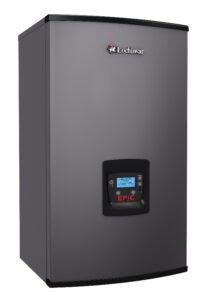 All units sold by Lochinvar to Canadian customers were Lochinvar branded.

The brand, model number and serial number can be found on the data plate on the unit located either on the exterior left side of the jacket or the inside of the removable front jacket panel.

This is a joint recall with Health Canada, the United States Consumer Product Safety Commission (US CPSC) and Lochinvar, LLC.