Developer of autonomous HVAC control technology for buildings makes list of the world's most innovative inventions of 2020. 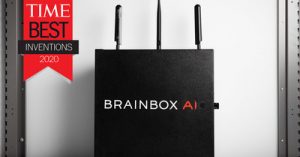 BrainBox AI, the Montreal-based developer of autonomous HVAC control technology for buildings has been listed among TIME magazine’s Best Innovations of 2020.

First launched in May, 2019, BrainBox AI combines deep learning, cloud-based computing and algorithms to autonomously-control a building’s environment 24/7. It’s artificial intelligence (AI) technology is designed specifically for HVAC systems in commercial buildings and is reported to deliver up to a 25% reduction in total energy costs, a 20-40% reduction in carbon footprint and a 60% increase in occupant comfort.

“We are thrilled to be included in TIME’s prestigious list of the world’s most innovative inventions of 2020,” said Jean-Simon Venne, Chief Technology Officer and co-founder at BrainBox AI.