Showing a huge increase was the commercial component which increased 11.4 per cent. 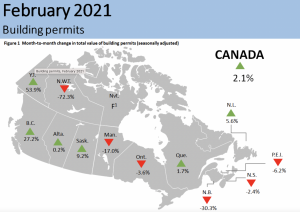 Statistics Canada announced a record number of building permits issued in the month of February, surpassing the $10-billion mark for the first time in Canadian history.

The non-residential sector saw the highest increase of 14.2 per cent to $3.3 billion in February. Meanwhile, institutional permits showed the largest value increase since June last year, seeing their total skyrocket from $226 million to $1.0 billion.

Also showing a huge increase was the commercial component which increased 11.4 per cent to $1.7 billion, its highest number since last September. 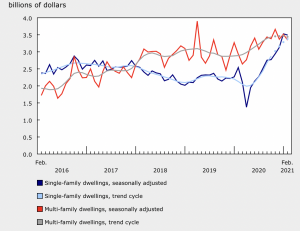 Provincially, Alberta also reported a trend of increased commercial building permit proposals, with numbers not seen like this since Dec. 2019.

In B.C., several high-value permits were issued for multi-family dwellings, up over 59 per cent, including two for a University District condo development in the city of Surrey. However, declines in six provinces, including Ontario (-23.9 per cent) and Alberta (-39.2 per cent), pulled this sector down nationally, with a 4.9 per cent drop to $3.3 billion.

In Ontario, building permits for single-family homes dipped one per cent to $3.5 billion, although they still remain at a three-month consecutive all-time high ($1.5 billion). Similarly, P.E.I. reported building permit requests close to double the values typically observed prior to the pandemic.

On a local level, municipalities also reported a rise in permits requests with $544 million worth for industrial buildings in February, up close to two per cent from January.