Sixty-eight Ontario students will be heading to the Skills Canada National Competition that is being held in Moncton, NB on June 5-8, 2016. This is the largest group of skilled students the province has sent to the national skills competition to date.

The students who comprise Team Ontario are from both high school and college programs, and qualified for their positions at the Ontario Technological Skills Competition (OTSC) in May 2016. the Ontario Technological Skills Competition (OTSC) is Canada’s largest skilled trades competition. At OTSC Hy-Mark offered apprenticeships to the post-secondary gold medalists in the Plumbing and Sheet Metal contests. 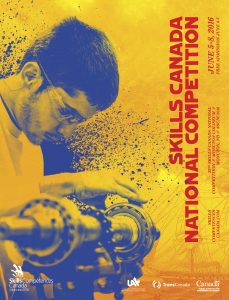 A record number of competitors from Ontario are headed to Skills Canada.

With over 67 contests, 2,000 competitors and 20,000 spectators, the hallways at RIM Park in Waterloo were bustling. Adding to the excitement was the fact that this year is a qualifying year for the 2017 WorldSkills Competition, which will be held in Abu Dhabi, United Arab Emirates in October 2017.