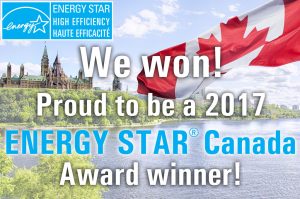 Rheem and QBD Cooling Systems Inc. have both won awards from ENERGY STAR Canada. QBD was named the 2017 ENERGY STAR Manufacturer of the Year for Commercial Products. The company’s noteworthy 2016 accomplishments include developing a line of coolers based on hydrocarbon (HC) refrigerants that are more energy efficient than traditional coolers. All of its HC products in 2016 are ENERGY STAR-certified.

The ENERGY STAR-certified units, with 97 per cent AFUE, are on the ENERGY STAR Most Efficient list for 2016. The company also introduced the Prestige Series variable speed air conditioners and heat pumps, which are ENERGY STAR-certified and rated up to 20-SEER and 11 HSPF for heat pumps. Rheem has partnered with NRCan, NetZero Project, the Province of BC, FortisBC and BC Hydro to test and validate the 3.50 EF efficiency of a hybrid electric water heater.