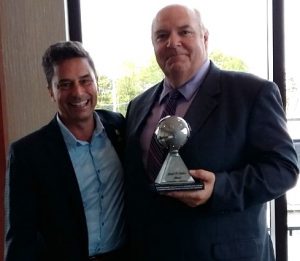 “This unique award and honour is bestowed to those in our industry who share their knowledge and expertise in developing safer plumbing codes and standards,” said Kevin Ernst, who is the Plumbing & Mechanical Advisory Council (PMAC) chair. “Sidney follows Joe’s example and has been a key leader for the regulatory and policy development, codes and standards development; participating on both the plumbing and gas side for the last two decades. Sidney has led CACP with obvious passion and vision.”

The award is the result of the dedication of many people who he has worked with over the last decade, Manning said during his acceptance speech. The CIPH board of directors established the award in 2000 to honour Joe Seidner, its first recipient and an industry leader. Seidner died in 2003, aged 96.