Statistics Canada has released the 2018 data for new registration in apprenticeship programs and trades certifications.

According to the report’s data, the number of new registrations across Canada has risen from 70,597 in 2017 to 79,860 in 2018.  Over half of the new registers were in Québec. British Columbia, Alberta and Ontario also reported significant increases.

Following four consecutive years of decreases, the number of certificates granted within the trades has risen 6.6 per cent to 54,520 in 2018. Like the new registrations, most of the increase in certificates were found among tradespeople in Ontario, Québec and British Columbia, primarily among electricians, metal workers, plumbers, aestheticians, pipe and steam fitters as well as food service. 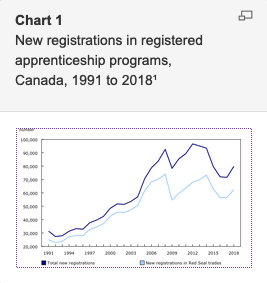 More women than ever are registering for apprenticeship programs. According to the data collected, the number of new registrations by women has doubled over the past 30 years. While the majority of female registrations were in trades such as early childhood educators, hairstylists and food services, more women have begun to enrol in apprenticeship programs that have been statistically speaking, traditionally occupied by men.

Despite the slow-but-steady rise of women in the trades over the years, women still remain a minority across apprenticeship programs and on job sites. 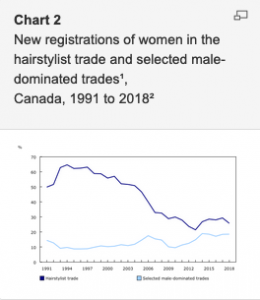