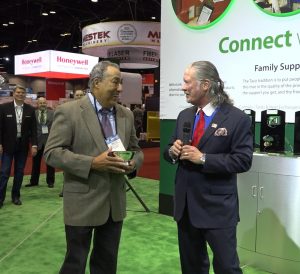 John Hazen White, Jr., executive chairman of the board at Taco, and Wil VandeWiel, CEO of Taco, presented the award to Marshall (left).

Marshall is the third recipient of the award, and was recognized for his education and training contributions in the industry.

He joined Emerson Swan, based in Randolph, MA, in 2005. At the time of his retirement in 2017, Marshall had trained numerous contractors, wholesalers and sales representatives, according to Taco.

Marshall has worked in the heating industry since 1968 as an oil truck driver in South Boston. He then became a heating service technician, independent heating contractor and oil company owner.

Marshal joined Atlantic Petroleum as a Field Supervisor in 1990, coordinating installations and service, as well as trouble shooting with field technicians. www.tacocomfort.com