More than half of the money is aiding projects that support children and families in and from Ukraine. 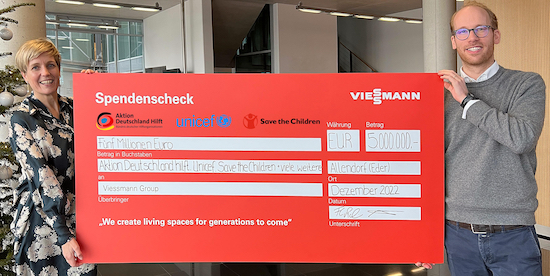 Just prior to Christmas, the German-based Viessmann Foundation announced the distribution of five million euros ($7.185 million) with more than half of the money going to aid projects that support children and families in and from Ukraine.

Two million euros will be donated in the first quarter of 2023 to three organizations focused on families in need from Ukraine and on building infrastructure and enabling local schooling:

And one million euros was already donated by Viessmann employees and the company in spring 2022 to support Ukrainian families affected by the war. The donations went to local initiatives that supported Ukrainians as they left their country, as well as to organizations for integration assistance and reconstruction.

“The situation in Ukraine affects us all,” said Maximilian Viessmann, CEO of the Viessmann Group in a media release. “As a family business with family members in and from Ukraine, we are sending a clear signal of social responsibility to those who need our help and solidarity most urgently this winter. Therefore, the majority of our historic donation of a total of five million euros via the Viessmann Foundation supports children and families in and from Ukraine, who particularly suffer from the consequences of this cruel war during the cold season.”

The additional 2 million euros from the Foundation’s donation will be distributed to the national companies of the Viessmann Group according to the number of employees. Each country receiving at least 2,500 euros to support local organizations.

The Viessmann Foundation was founded in 2020 and follows this mission statement: “Shaping sustainable living spaces for future generations together – with everything we do.”