Ouellet celebrates half century of innovation 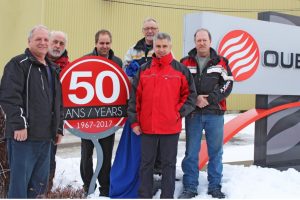 Ouellet Canada is celebrating its 50th anniversary this year. “This is a historic moment for the owners and directors of the company. We want to recognize it throughout the year and we will therefore be organizing celebratory events every month,” said Martin Beaulieu, president of Ouellet Canada, at the company’s annual general meeting in January.

Two other signs displaying the 50th anniversary logo have been erected, one at the employee entrance at the L’Islet plant, and the other outside the entrance to the distribution centre in Montmagny.

Based in L’Islet on the south shore of the Saint Lawrence River in Quebec, Ouellet Canada designs, manufactures and sells electrical heating products for the residential, commercial and industrial markets.

Ouellet Canada Inc. had humble beginnings. Charles-Émile Ouellet launched the business from a makeshift workshop in his home, but it wasn’t long before the little business became more than a backyard venture. Pushing the limits of innovation and keeping research and production tightly focused on high-performance electrical heating products paid off as Ouellet expanded beyond Quebec to national, American and overseas markets.

Today, with a workforce of over 225 employees and 100,000 sq. ft. of production facilities, Ouellet Canada serves the residential, commercial, and industrial sectors.