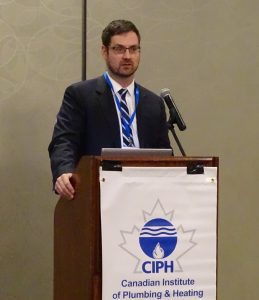 Jason Mercer of the Toronto Real Estate Board (TREB) gives an overview of the housing market in the GTA during the CIPH’s Ontario Region business meeting October 26.

A total of 92 attendees were on hand for the Canadian Institute of Plumbing and Heating (CIPH) Ontario Region business meeting on October 26 at the Mississauga Convention Centre. The event featured Jason Mercer, director of market analysis and service channels at the Toronto Real Estate Board (TREB).
During his presentation, Mercer gave an overview of the Greater Toronto Area’s real estate market, which he said had seen several changes recently. Earlier this year, for example, Ontario had outlined a 16-point plan—called the Fair Housing Plan—designed to protect buyers and renters, help people find affordable homes and increase supply. The province has put a 15-per cent tax on foreign buyers while the market is also experiencing supply issues with only about three months of inventory available, Mercer said.
British Columbia put a foreign buyers tax in place in 2016. In response, TREB polled its members to see how many were foreign buyers, what they planned to do with the home and so on. “It’s not a heck of a lot of deals that we’re talking about,” he told the audience, adding that the number of such transactions dropped after the tax was announced.
With all the attention surrounding foreign buyers, it is unsurprising there has been a pullback in the marketplace, Mercer noted. After BC installed the tax, sales dropped but then moved back to where they had been previously. This shows the psychological effects of such taxes, he said.
The GTA is experiencing a 16-year low in its unemployment rate, Mercer said, which removes a stress from the housing market. Canada’s economy is also doing well so people should start moving back into the market. But interest rates have complicated that, with people being accustomed to lower rates and more sensitive to fluctuations.
In 2016, a larger number of people reported searching for detached homes, Mercer said. Now, more are saying they are looking for condo apartments. As well, inventory is being measured in months or even days in some GTA neighbourhoods. The impact of that is that the annual price growth has moderated—however nothing in the data suggests a protracted price decline. At the same time there is usually a dip in home sales during the late summer and fall, which makes it more difficult to assess the impact of these factors, Mercer said.
The next CIPH Ontario Region Business Meeting is on January 31, 2018 at the Mississauga Convention Centre. The speaker will be Beth Ziesensis, who will give a talk entitled Secret Tech Weapons for Plumbing and Heating Professionals.