Challenges ahead for globalization 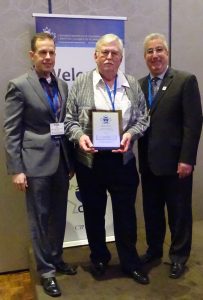 Guest speaker Paul Wells, The Toronto Star national affairs columnist, said that Prime Minister Justin Trudeau in some ways leads a government in crisis. “How he responds will go a long way in making or breaking his career as prime minister—I’m talking about the crisis of globalization,” Wells said.

Trudeau operates in a world rejecting some of globalization’s assumptions, Wells said. Brexit, Donald Trump’s election and the rise of far-right sentiment in Europe provided examples of this trend. Facing this, Trudeau is seeking infrastructure investment while touting Canada as stable and prosperous to international business.

Another industry challenge–that of attracting people to careers in plumbing and heating–was addressed at the meeting. YES provides training, networking and other career help, reported Josh Hopkins, CIPH Ontario Region YES Chairman. Those 40 and under and employed by a CIPH member company can participate. The society will host a panel discussion at the Mississauga Convention Centre on March 9.

Hopkins attended JDC Central, an undergraduate business school competition, in Ottawa January 6 to 8. He and other CIPH representatives raised awareness there about the organization and the mechanical industry. “When students understand more about our industry and who we are, they begin to see that a career in plumbing and heating is possible,” said Hopkins.

The next CIPH Ontario Region Business Meeting will be held March 30, 2017.