Investment in Building Construction Decreases in May 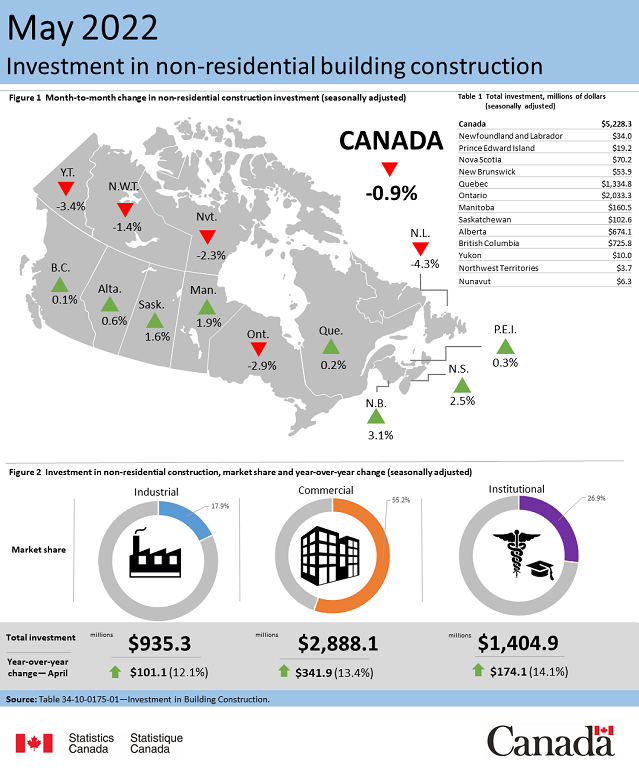 Statistics Canada has reported that month-over-month investment in building construction down 0.2% in May 2022, totalling $20.6 billion. Many of Ontario’s unionized construction workers were on strike during the month, so excluding Ontario, investment in the category actually saw an increase of 1.1% at the national level.

Investment in single family homes declined 2.5%, ending its seven-month growth streak. Overall, six provinces reported growth in May, which was offset by declines in four provinces, with Ontario and Quebec causing most of the fall.

Investment in the non-residential sector contracted 0.9% to $5.2 billion in May, with the construction worker strike in Ontario offsetting the gains of eight provinces and driving all three components (institutional, commercial & industrial) downwards.

Investment in the industrial component edged down 0.2% to $935 million, with the increase in Quebec +2% largely offset by the declines in Ontario -1.2%.

Despite gains in eight provinces, the commercial component decreased 1.2% to $2.9 billion based on the strike in Ontario. This was the first decline in 13 months.