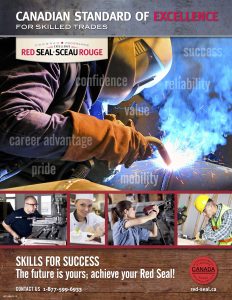 One of the top priorities of the Strengthening the Red Seal initiative was to achieve an improved standard.

When the Canadian Council of Directors of Apprenticeship (CCDA) launched the Strengthening the Red Seal initiative, one of the top priorities was to achieve an improved standard. The piloting of the Red Seal Occupational Standard (RSOS) in the Construction Electrician and Steamfitter/Pipefitter trades has been completed. The RSOS, which will take the place of the National Occupational Analysis (NOA), has a broad engagement of stakeholders in setting the standard.

There are a number of features that have been added to the new standard. Descriptions of the performance and evidence of attainment help to better define the skill requirements for the trade. Setting specific learning outcomes and learning objectives necessary to acquire the knowledge behind the trade is also an improvement. These additions will help apprenticeship training providers to develop technical training programs that meet the needs of industry that are in the standard. These features align with the CCDA’s priority of supporting the harmonization of apprenticeship training across Canada.

With all of the features collected in the new standards, there are a number of products that can be derived from them, with content compiled specifically for particular users and applications. These include:

• informational products such as the occupational standard, standards posters and trade profiles;
• tools that support assessment such as exam development guides, exam preparation guides and declaration of trade work experience forms;
• apprenticeship training products such as curriculum outlines, logbooks, on-the-job training guides and essential skills outlines.
All of the RSOS informational products will be available for download at www.red-seal.ca.
Other products and tools will be available for use by apprenticeship authorities to implement and adapt within their own jurisdictions. The CCDA plans to roll out the new standard to all Red Seal trades as part of their regularly scheduled revisions.

Since the Forum of Labour Market Ministers (FLMM) announced its strategic plan to harmonize 30 Red Seal trades in most jurisdictions by 2020, reaching over 90 per cent of apprentices, the CCDA has made steady progress.

Over the past few months, the CCDA has integrated a new and more efficient process that aligns harmonization with the existing Red Seal Occupational Standard (RSOS) development process, which allows for long-term sustainability.

With the first two phases well underway, the CCDA has announced the next set of trades to be harmonized by 2020: