To meet anticipated demand, Canada will need a total of 375,026 apprentices across 56 Red Seal trades over the next five years. 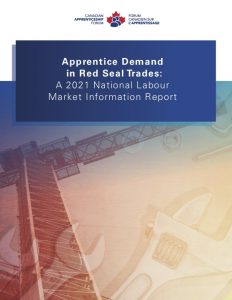 The Canadian Apprenticeship Forum (CAF-FCA) has released its latest labour market information report, Apprentice Demand in Red Seal Trades which estimates that 163,785 new journeypersons will be required from 2021 to 2025 in order to sustain workforce certification levels across 56 Red Seal trades in Canada.

To meet that anticipated demand, Canada will need a total of 375,026 apprentices over the five-year period.

The following are estimated registration targets in regions across the country:

Nationally, boilermaker is high on the list of trades where demand will greatly exceed the supply over the next five years.

The projection shows that plumbing appears to line-up with required demand, and HVAC mechanics and steamfitter/pipefitter certifications will be in relatively good supply.

The research shows that new registrations for multiple trades began to rise in 2018, with continued growth in 2019, and the trade that experienced the most pronounced increase from 2015 to 2019 was refrigeration and air conditioning mechanic (+29%).

Registrations however do not equate with Red Seal program completions, and in the period between 2015 t0 2019 program completions across the provinces for plumbers rose 13%, and for refrigeration and air conditioning mechanics was up 5%, while completions for boilermakers was down 12% and steamfitter/pipefitter completions were down 63%.

The 2021 Apprentice Demand reports are available at caf-fca.org