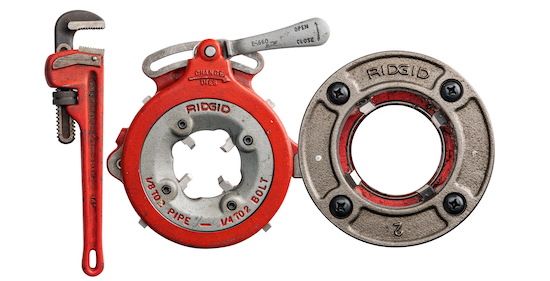 Ridgid, a part of Emerson’s professional tools portfolio, is celebrating a major milestone this year: 100 years of designing and building tools. To commemorate the occasion, Ridgid will spend the year 2023 celebrating the trades, their impact on our world, and the brand’s legacy.

In 1923, the Ridgid tool company invented the modern straight pipe wrench, introducing it to the world under their brand Ridgid. Since then, every step forward has been with the tradesperson in mind.

Ridgid’s signature red heavy-duty straight pipe wrench bodies are still cast at its ductile iron factory in Erie, PA, assembled at its headquarters in Elyria, OH, and then shipped from its distribution facility in Cambridge, OH.

Along with these locations, Ridgid has grown over the past century with global facilities that help keep up with demand from around the world. The company’s product line has also grown. Ridgid launched power threading solutions in 1948; drain cleaning equipment in 1967; press tools in 1999 and most recently, pipe patching last year as it continues its proud tradition of innovation.

Now, more than 100 patents and 100 years later, Ridgid continues to deliver purpose-built tools that are known around the world for their ability to complete jobs more quickly and reliably. They currently offer more than 300 tools for the plumbing, mechanical and HVAC professional.

In recognition of its milestone anniversary, Ridgid will be holding giveaways of commemorative anniversary wrenches and other brand swag throughout the year. Early this year they will also be launching “Ridgid Wrenched 100,” a specialty beer developed in collaboration with Unplugged Brewing Company located less than a mile away from Ridgid headquarters in Elyria. In addition, the company will host commemorative events at major trade shows.