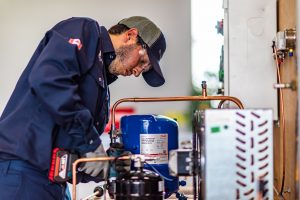 Zach Walsh from Cambridge, Nova Scotia has been awarded a Medallion of Excellence in refrigeration and air conditioning at WorldSkills. The four-day international competition was held in Kazan, Russia from August 22-27, 2019.

His skills in refrigeration and air conditioning were tested against the best students and apprentices in the world. He earned his spot on Team Canada after his performance in the WorldSkills Selection Event, held in conjunction with the Skills Canada National Competition that took place in Halifax, Nova Scotia, May 26-29, 2019.

Walsh was one of 32 members of the WorldSkills Team Canada that competed this week. Prior to the selection event, Walsh won a gold medal at the Nova Scotia Skills competition in 2016, 2017, and 2018, and won a national gold medal in his skill in 2017 (Winnipeg) and 2018 (Edmonton).

To prepare for this high-level competition, Walsh spent this last year researching and training on the job with his employer, Acadia Refrigeration & AC in Kentville, and in the shop at Nova Scotia Community College in Dartmouth with his coach, Kevin O’Halloran and WorldSkills Expert, Brian Nicholl.

“Being on Team Canada was an amazing and formative experience that I’ll never forget. I’m so grateful for all of the support I’ve received over the years and this week in particular, from family, friends, teachers, colleagues, industry partners and Skills Canada. This medal of excellence is truly an honour to receive,” said Walsh.

“We are thrilled to have brilliant skilled youth like Zach represent our province on the world stage. Zach is one of the most focused and determined competitors we’ve ever had,” said Courtney Gouthro, executive director of Skills Canada – Nova Scotia. “We couldn’t be more proud of him.”

WorldSkills Team Canada 2019 was awarded with 1 Medal and  14 Medallions of Excellence.

The WorldSkills Competition is held every two years. With 1,354 competitors, 63 countries and regions, and 56 skill disciplines, WorldSkills is the biggest vocational, education and skill excellence event in the world. Sectors represented include Manufacturing and Engineering Technology; Information and Communication Technology; Construction and Building Technology; Transportation and Logistics; Creative Arts and Fashion; Social and Personal Services.

Skills Canada – Nova Scotia is a not-for-profit organization that provides opportunities for Nova Scotian youth to explore skilled trades and technologies, discover their passions, and strive for excellence.