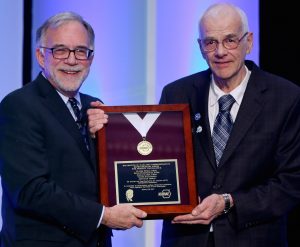 Rink refrigeration expert Claude Dumas (r) of Montreal, QC, accepts the Milton W. Garland Commemorative Refrigeration Award For Project Excellence from ASHRAE president Tim Wentz. The award is “Given in recognition of a non-comfort cooling refrigeration application which highlights innovation or new technologies.” Co-winners of the award were: consulting engineer Peter Petropoulos, Costas Labos with the City of Montreal, and refrigeration specialist Victor Santangelo. The project involves the conversion of 47 municipal rinks from HCFC 22 – GWP 1,700 – to ammonia and is expected to be complete in 2020. In a paper for the International Institute of Ammonia Refrigeration Dumas et al. wrote: “Our focus was always to reduce the risks through prudent design and implementation aimed at minimising the ammonia refrigeration charge, surpassing industry standards and never compromising safety and performance.”

UPDATED North America’s premier HVAC/R event, the 2017 ASHRAE Winter Conference at Caesars Palace, as well as the AHR Expo at the Las Vegas Convention Center, exceeded record-breaking attendance from the Conference and Expo that were held in Las Vegas in 2011.

In total, 3,579 people attended the ASHRAE conference from January 28 to February 1, making it the most well attended Winter Conference in recent years. The attendees represented 58 countries (with 350 Canadians attending) and included 537 first-timers.

The Conference also saw several collaborative efforts and agreements with associations and organizations from around the world.

“Partnering with allied organizations and associations better allows us to harness and adapt new technologies, which we can all use in working toward a more sustainable environment,” said ASHRAE president Tim Wentz. “By working together, we can create a worldwide best practices databank of innovative and successful technologies that can serve the built environment community.”

ASHRAE signed memoranda of understanding with several groups, including the United Nations Development Programme (UNDP), the Indian Society of Heating, Refrigerating and Air Conditioning Engineers (ISHRAE) and Association of German Engineers (VDI-GBG). The Society also signed a strategic partnership agreement with the Chartered Institution of Building Services Engineers (CIBSE) and the Federation of European Heating, Ventilation and Air-Conditioning Associations (REHVA). In addition, it updated its Work Plan with the United Nations Environmental Programme (UNEP).

As part of the event, the Clean Climate and Air Coalition (CCAC) held a Sustainable Technologies for Stationary Air Conditioning Workshop focused on climate-friendly and cost-effective air conditioning technologies.  ASHRAE is an actor with CCAC.

At the conference, Wentz provided updates on several Society initiatives and programs of importance to the industry. Among them was creation of a new ‘ASHRAE University’ educational platform, which will locate all of ASHRAE’s educational products in one place where users can select the products to meet their professional goals. Additionally, a personal dashboard is built into the new platform allowing users to track their progress toward their goals. The new platform can be found at www.ashrae.org/elearning.

ASHRAE also has launched a new Technology Portal at www.ashrae.org/technologyportal. This gives ASHRAE members a method of connecting to the latest information generated by ASHRAE’s research program. It provides access to more than 1,700 Journal articles published since 1997 and more than 600 final reports from ASHRAE research projects. A new, online internship job board on ASHRAE’s website was also unveiled (http://jobs.ashrae.org).

The Technical Program featured some 350 presentations and 300 speakers.

The International Exposition Company has announced specifics for attendance highlighting that the show has officially broken three of its all-time records. With 68,615 attending the 2017 Show, AHR Expo superseded its former all-time attendance record of 61,674 (set at the 2015 Show in Chicago) by 11.2 per cent. This number was also 28.7 per cent greater than the overall attendance (totaling 53,324) at the last AHR Expo held in Las Vegas in 2011. Total Canadian attendance (including visitors and exhibitor personnel) was 4,768 with visitors accounting for 3,543 – a record at 33 per cent higher than the previous all-time record set at the 2011 Vegas show.

The 2017 Show’s nearly 11.5 acres of exhibit space was occupied by 1,968 exhibitors, 259 of which participated in the AHR Expo for the first time. Canadian exhibitors numbered 147 with 1,225 personnel in attendance. A notable 20,047 exhibitor personnel staffed the exhibits in Las Vegas, representing a majority of the U.S. geographic landscape, as well as 32 outside countries.

The next AHR Expo, co-sponsored by ASHRAE and AHRI, will be held January 22 to 24, 2018 at McCormick Place in Chicago.