Contractor and CE numbers up at CMPX 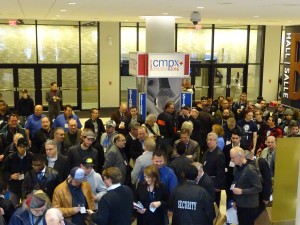 CMPX 2016 was a resounding success with attendance numbers expected to be record breaking.

Sponsors of the 2016 Canadian Mechanical Exposition & Trade Show and Learning Forum (CMPX) have reported increases in key attendee categories including contractors (+14 per cent ) and consulting engineers (+73 per cent). Official attendance figures were unavailable at press time. The show was held March 16-18, 2016 at the Metro Toronto Convention Centre.

Highlights included the new CMPX Show Floor Theatre, which drew audiences for Learning Forum sessions offered during the show. There was near sold out attendance at the new Keynote Breakfasts, held each morning on industry issues including the internet of things, hydronics and refrigerant trends. A record number of buses sponsored by industry wholesalers brought contractor customers to the show. 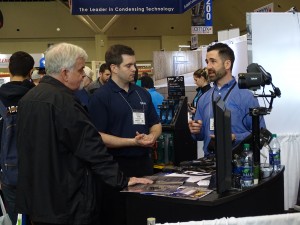 ducts were on display at the New Product Showcase for potential buyers and booth information on where “in-person” information could be found at the show.

HPAC held contests for visitors to its CMPX booth. Three lucky winners received a copy of John Siegenthaler’s latest book Heating With Renewable Energy. As the winner of HPAC’s Tremendous Tool Take-Away, Ryan Moniz of Quality Mechanical in Mississauga, ON, is now the owner of thousands of dollars of new tools. Read more.

Look for more coverage of the 2016 show in HPAC May.

CMPX is Canada’s national show for the mechanicals industries. It is jointly presented by the Heating Refrigeration and Air Conditioning Institute of Canada (HRAI) and the Canadian Institute of Plumbing & Heating (CIPH). CMPX 2018 is scheduled for March 21 to March 23, 2018, at the same venue.