Lochinvar, represented in Canada (with the exception of Quebec) by master distributor Aqua-Tech Sales and Marketing Inc., formally introduced the NOBLE Fire Tube Combi Boiler to distributors, contractors and engineers at the launch event held September 12, 2017 at the Hockey Hall of Fame in Toronto, ON.

Suited to residential applications, the boiler is offered in three models ranging from 110,000 to 199,999 Btuh. The NOBLE combi boiler is designed to offer easy installation and serviceability, true instantaneous response time and a user-friendly interface. It features 10:1 turndown and 95 per cent Annual Fuel Utilization Efficiency (AFUE). The NOBLE Fire Tube Combi Boiler is designed, engineered and assembled in the U.S.

Door prize winners included Warren Parkes from Active Mechanical and Vince Baggetta from Next Plumbing and Hydronics Supply who took home a Turbotorch TX503 and a branded water bottle. 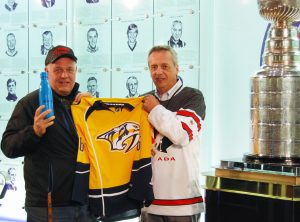 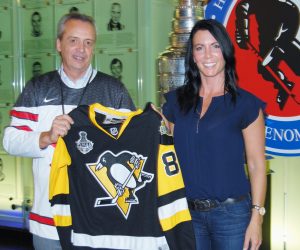 Kendra Fisher was the keynote speaker at the event. She grew up in Kincardine, ON and achieved great success in her hockey career. However, when faced with the opportunity to realize her dream of goaltending for Team Canada, she was diagnosed with a severe anxiety disorder coupled with severe panic attacks, depression and agoraphobia; forcing her to leave the National Program in order to seek help to learn how to live with what had become a crippling disease. She now shares her personal journey and has joined efforts to bring mental health issues to the forefront.