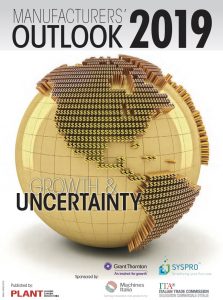 Outlook 2019 study shows they are expecting business to be good, but confidence has tumbled since last year.

Canadian manufacturers are optimistic about their prospects in 2019, but significantly less confident than last year as concern mounts that Trump administration policies, including U.S. protectionism, and other disruptive factors will affect their businesses, according to a new survey of senior manufacturing executives.

They are either very or somewhat concerned about what is going on in America. U.S. protectionism is very worrying to 65% of executives compared to 54% last year, followed by US protectionism (65%), U.S. President Donald Trump’s impact on nation-to-nation relationships (61%) and changes resulting from the NAFTA renegotiation (56%).

“Canadian manufacturing has been booming, but there are storm clouds on the horizon and that’s eroding Canadian CEOs confidence in 2019,” said Jeff Brownlee, publisher of PLANT Magazine, which commissioned the survey.

How are companies staying ahead of the risks? Two-thirds (66%) are conducting assessments, 29% regularly and 37% sometimes. Regulatory change leads the list of concerns for 41%.

The survey, in partnership with Grant Thornton LLP, SYSPRO Canada and Machines Italia with the Italian Trade Commission, is based on 501 replies from senior manufacturing executives.

Despite their concerns, manufacturers are demonstrating their confidence with plans to make significant investments in their businesses. Their mood going into 2019 was generally upbeat.

“I’m an entrepreneur, so I’m cautiously optimistic all the time,” said Kevin Merritt, president of Superior Radiant Products (SRP). The company manufactures energy-efficient radiant heating products in Stoney Creek, ON. “We’re always looking for new markets. We did engage a UK partner this year, so we’re exporting there.”
Top choices for investment over the next three years are machinery, equipment and technology (75% of respondents) and training (63%). Average investment is more than $1.7 million.
More than half of the senior executives (55%) expect sales to increase (an average 12%); 60% predict orders will increase (13%) but costs will also increase (9%). Pricing will rise for 54% averaging 8%. Thirty-five per cent see profits rising (11%).

Controlling costs tops the list of challenges for 65% of respondents, followed by pressures on prices (61%) and filling skills needs/management talent (46%).

Companies lag in the adoption of advanced measures and technologies that would improve productivity. Only 33% make use of automatic data access, analysis and review to measure and monitor productivity; 43% do it manually; and 8% don’t measure.

Respondents demonstrated a very limited engagement with IIoT (industrial internet of things), which connects and optimizes machines via the internet. Only 7% are applying IIoT capabilities, 32% are not familiar with these capabilities and 31% said they were not applicable.

This year’s survey added questions about corporate culture–the values, beliefs and attitudes that characterize a company and guide its practices–as part of a formal business strategy. Most companies (28%) include a formal program and/or policies, 24% have an informal program in place and 23% are working on it, while 26% aren’t doing anything.

Other highlights from the survey:

Download a copy of the Manufacturers’ Outlook 2019 report, which includes an executive roundtable.