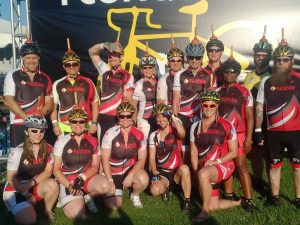 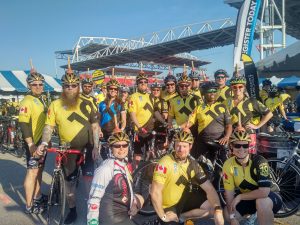 Congratulations to Team Noble Corporation whose 16 members raised over $45,000 for the Ride To Conquer Cancer this year. Noble has raised over $1,000,000 since it started participating seven years ago.

The Enbridge Ride to Conquer Cancer, which was held June 10-11, 2017, benefits Princess Margaret Cancer Centre in Toronto. The fundraiser is a two-day, 200-kilometre ride between Toronto and Niagara Falls. Funds raised through the Enbridge Ride to Conquer Cancer support Personalized Cancer Medicine, including research, treatment advances, education and new standards of care at the Princess Margaret, across Ontario, and around the world.

Riders were supported by hundreds of volunteers and crew members. 2017 marks the 10th annual Ride in Ontario, with similar Rides scheduled throughout the summer in Quebec, Alberta, and British Columbia. The Ride to Conquer Cancer series is Canada’s largest peer-to- peer fundraising event. In just nine years, the Ontario Ride has raised more than $155 million for cancer research across the province, and has become the largest cycling fundraiser in Canadian history.