Seresco Technologies, a manufacturer of indoor pool dehumidification equipment, has named Kilmer Environmental of Mississauga, ON, as its “2016 Rep of Year-Canada.” The announcement was made at the International Air-Conditioning, Heating and Refrigerating Exposition (AHR Expo 2017) on January 30 in Las Vegas, NV. 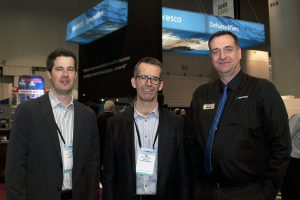 Kilmer Environmental covers the central and western Ontario territories with its humidity control specialization. The rep has sales in nearly every dehumidification category including YMCAs, hotels, condominiums and residences, but two large projects were notable last year. The $12.5 million renovation to the Victoria Road Recreation Centre in Guelph, ON features a Seresco NP-50 Protocol dehumidifier.  A retrofit of the Chinguacousy Wellness Centre in Brampton, ON included the addition of a Seresco NP-30 Protocol dehumidifier and the integration of a dedicated heat recovery exhaust that evacuates chloramines from the pool surface.

Seresco USA Inc. is the U.S. subsidiary of privately-owned Seresco Technologies Inc. in Ottawa, ON. The company specializes in commercial and residential indoor swimming pool dehumidifiers and other indoor air quality HVAC equipment.