The Scotiabank Road Hockey to Conquer Cancer event was held on September 28 at Woodbine Racetrack in Toronto, Ont. This year’s ninth-annual edition of the event attracted 167 teams, 1,900 people and raised $3.1 million for the Princess Margaret Cancer Foundation- all while playing the most Canadian of games.

NEXT Plumbing and Hydronics Supply, based in the Greater Toronto Area, was among the largest supporters of the event, rallying 22 teams, 300 people and raising over $345,000 this year. 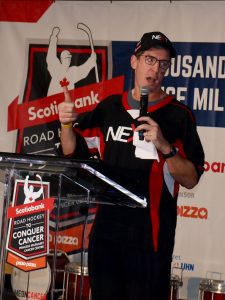 NEXT CEO, Michael Storfer, speaks at the opening ceremonies on September 28

At NEXT, the Road Hockey To Conquer Cancer presents the opportunity to be integral to its community, to come together to have fun, give back and remember those who have been lost to cancer.

Michael Storfer, president of NEXT, was a media ambassador for the event and was a part of the opening ceremonies. The company received backing from the plumbing and hydronic vendor community, including employees, colleagues, business partners, vendors and many customers (from plumbers and contractors, to engineers and business owners.)

“We believe in being integral to our customers, co-workers and community,” Storfer said in a release. “Events like this are a tremendous occasion to engage employees, customers and vendors to make a difference for a cause that touches so many of us.”

NEXT provided fundraising support, a personalized jersey, game day cap and lasting memories to each person who played. To further support the event, NEXT hosted van washes, 50/50 draws, lunch time running groups, bake sales and BBQ’s in the weeks leading up to the event.

Each team played four games during the tournament. The top fundraising teams had an extra incentive for their efforts- an opportunity to ‘draft’ and play with former NHL player, Shayne Corson.

“Hockey has always played an important role in my life,” said Corson, who played on NEXT’s ‘Plumbing’ team. “One of the reasons I love coming to this event is that it allows me to play a game I love to raise funds in honour of my Dad, who I lost to cancer. Not to mention, it’s just a really fun day!”

The Princess Margaret Cancer Centre is the largest institution of its kind in Canada devoting 100 percent of proceeds to conquering cancer. Fundraising efforts support breakthrough research and discovery of new, more effective cancer-fighting therapies. NEXT has already committed to 30 teams in 2020.