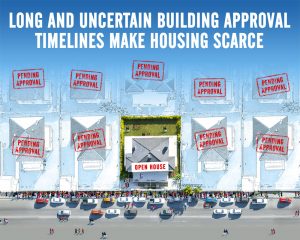 “The dramatic growth in prices in Canada’s major housing markets is exacerbated by municipal regulations that restrict housing supply, encourage the growth of prices and negatively impact the affordability of housing,” said Kenneth Green, Fraser Institute senior director and co-author of The Impact of Land-Use Regulation on Housing Supply in Canada.

The study covers 68 municipalities (including 18 of Canada’s largest) and analyses the impact of five measures of land-use regulation – construction approval times, timeline uncertainty, regulatory costs and fees, rezoning and the effect council and community groups have on development –on the growth of housing supply.

The core finding is that in more regulated municipalities, housing supply tends to grow less, even after accounting for other factors such as geographical constraints and transportation.

The study finds that long project-approval timelines are particularly detrimental.

For example, increasing the time it takes a builder to obtain a construction permit by six months reduces the growth of new housing by 56 per cent.

The study also uses survey data from developers to gauge the effect of timeline uncertainty in each municipality, with responses measured on a five-point scale from (1.0) “encourages development” to (5.0) “would not pursue development due to uncertain approval timelines.”

When the perceptions of developers moved from the average (2.8 out of 5.0) to a higher level of uncertainty, growth of new housing dropped by 51 per cent. This finding is critically important in Vancouver, Toronto and Calgary, which have considerably more uncertainty than average.

“Regulatory reform at city hall, especially simplifying the process of obtaining building permits where housing demand has grown, could reduce homebuilding costs, increase the number of homes on the market and subsequently push down prices,” said Pierre Desrochers, Fraser Institute senior fellow and associate professor of geography at the University of Toronto.

The Fraser Institute is an independent Canadian public policy research and educational organization with offices in Vancouver, Calgary, Toronto, and Montreal and ties to a global network of think-tanks in 87 countries. Its mission is to improve the quality of life for Canadians, their families and future generations by studying, measuring and broadly communicating the effects of government policies, entrepreneurship and choice on their well-being. To protect the Institute’s independence, it does not accept grants from governments or contracts for research.