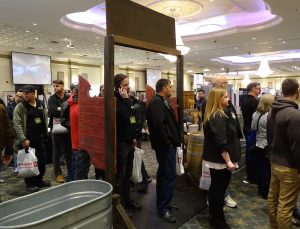 Wolseley’s second ONE tradeshow had a western theme.

There was a large turnout on the show floor for Wolseley Canada’s second Wolseley ONE Tradeshow March 29 at the Mississauga Convention Centre. Attendees networked while perusing over 70 plumbing and HVAC/R vendor displays for information and industry trends. A Western theme saw old-time barrels and bathtubs on display while attendees filed through a gate marked “saloon” to the bar.

The agenda featured three speakers including Martin Luymes, director of programs and relations at the Heating, Refrigeration and Air Conditioning Institute of Canada (HRAI), who discussed the HVAC/R business’s regulatory landscape. Door-to-door sales remains a problem, Luymes said. “It’s brought attention to the industry in ways that we would not have asked for,” he told the crowd.

To address the issue, Ontario’s Bill 59 focuses on sales contracts signed in the home, said Luymes. The bill’s penalties are “severe and escalating,” including homeowners potentially keeping equipment with no compensation for the company. Some of the bill remains unclear, such as whether the legislation will cover telephone calls to homeowners.

Regarding climate change, Luymes said both space and water heating have been tagged as important to a solution. The federal government is looking towards “strategic interventions” in the market to speed the adoption of high-efficiency space heating technologies. Plans include short-, medium- and long-term goals, such as cost-effective and accessible heat pump technologies for major end users by 2030.

In addressing regulatory harmonization, Luymes said a recent focus has been standards and building codes among provinces. Ontario and British Columbia are looking to move ahead with such harmonization, with Alberta also headed that way. 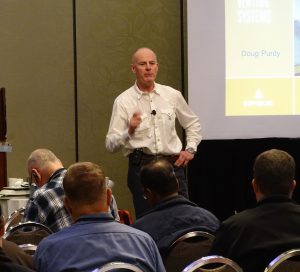 Renewable energy sources must deliver comfort to stay viable, noted mechanical engineer John Siegenthaler during another session. “You can never, ever lose sight of comfort as the driver,” he said. With floor heating, customers may be surprised that the floor isn’t warm, although people in the house are comfortable. Be prepared to discuss this with clients, Siegenthaler advised the audience.