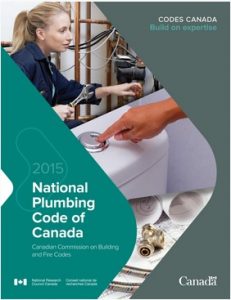 Research Council, tel.: 613.993.2463 or 800.672.7990, or online at www.nrc-cnrc.gc.ca/eng/publications/codes_centre/codes_guides.html.
The National Plumbing Code of Canada 2015 (NPC), published by NRC and developed by the Canadian Commission on Building and Fire Codes, sets out technical provisions for the design and installation of new plumbing systems and also applies to the extension, alteration, renewal and repair of existing plumbing systems.
Twenty-eight technical changes are incorporated in the NPC 2015, increasing design and material choices and introducing water-use efficiency for plumbing fixtures, supply fittings and shower heads. The new water-efficiency requirements aim to reduce water usage in all buildings, regardless of water source. The Environment objective, already in the National Energy Code for Buildings and the National Building Code, was also introduced into the NPC 2015 to address “excessive use of water.”
The NPC 2015 has been re-organized to consolidate relevant information. Each Part now contains the Prescriptive Requirements, followed by the Attribution Table and related (appendix) Notes.
Advertisement
Print this page