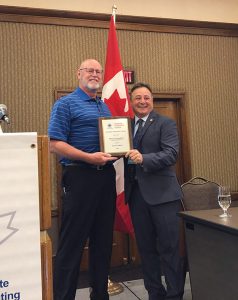 Communication, Engagement and Connection” was the theme of this year’s Canadian Institute of Plumbing and Heating (CIPH) annual business conference.
Inline with this message, the association emphasized communication as a key driver of progress.
Allen Taylor, newly elected CIPH chairman for 2018-19, said there is “real disruption on the horizon,” and the industry needs to be prepared.
“CIPH has many responsibilities, but I believe one of the key ones will be to start the conversation on this disruption,” said Taylor, president and CEO of Taylor Pipe Supports, in his inaugural speech.
More than 310 delegates from across North America – up from a record 280 in 2017 – along with companions and guests made the trek to scenic Whistler Village, BC from June 17 to 19, 2018 to network, learn and celebrate the association’s 85th anniversary.
The conference included presentations on leadership skills and the digital world, in addition to a keynote talk from John Furlong, former CEO of the Vancouver Olympic games, titled “The Vision that Changed a Nation.”
AWARDS AND APPOINTMENTS 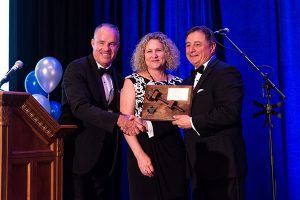 Allen Taylor (left), Susan Senese and Joe Senese participate in the passing of the gavel at the chairman’s dinner.

“We stand on the shoulders of boards that have been making the right decisions and the right calls for the last 85 years and it is my aim to continue this tradition,” Taylor said at the 86th annual general meeting.
As 71st chairman of the board, Taylor succeeds Joe Senese, vice president of operations at Group Deschênes Inc. and now treasurer of the board.
Drew Molnar, national sales manager at InSinkErator Canada, will take over as director of the manufacturers’ division. The committee also nominated Dave Hammond, general manager at A.O. Smith Enterprises, as chairman of the division.
Matt Robinson, vice president of sales at B.A. Robinson, is the new chairman of the wholesalers’ division.
The first, second and third vice chairman positions were filled by Andrew Dyck, vice president of sales at Barclay Sales Ltd., Gail Kaufman, vice president of marketing and e-business at Wolseley Canada, and Bill Hooper, regional sales manager for the Atlantic Provinces at Uponor, respectively.
Bill Palamar, chairman of the board for 2016-17 and president of Weil-McLain Canada Sales Ltd., will retire.
WARM WISHES
In a video presentation, CIPH received congratulations from a number of industry associations for its milestone anniversary.
“HRAI and CIPH have been working together on common industry matters for more than 45 years,” said Warren Heeley, soon to be retired president of the Heating, Refrigeration and Air Conditioning Institute (HRAI), in a video message.
“When I think about the relationship between our two associations, three things come to mind: shared interests, strength in numbers and collaboration,” he added.
ABC 2019 will be held at the Delta Prince Edward in Charlottetown, PE from June 16 to 18.<> www.ciph.com