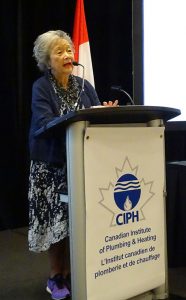 Keynote speaker Adrienne Clarkson, who is a former Governor General of Canada, shared her views on how to build a stronger country. 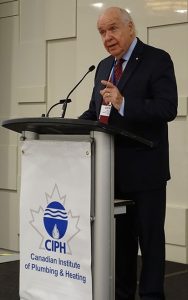 Attendees were enthralled with Former Ambassador to the United States Derek Burney’s views on Canada in the “World of Trump.” 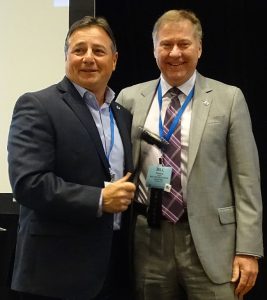 The Canadian Institute of Plumbing & Heating held its annual business conference June 25-27, 2017 in Ottawa, ON. More than 280 delegates and companions from across North America were in attendance, representing a high mark for the past decade. Remarkably, 44 of those attendees were new delegates. 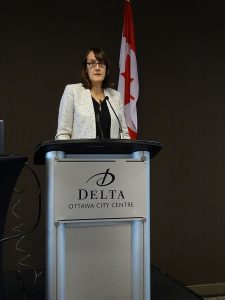 Themed Making History Together, the event featured a who’s who roster of speakers, including former Ambassador to the United States Derek Burney, former Minister of Foreign Affairs John Baird, and keynote speaker former Governor General Adrienne Clarkson.
MILESTONE MEMBERS
As part of its long range plan the CIPH board of directors recently set a goal to put into place a program for member companies to be recognized for their years as members of the Institute. The following companies were formally recognized at the ABC as having been members of CIPH since the founding of the Institute in 1933: Standard Sanitary Manufacturing Co. Limited (American Standard Brands); General Steel Wares Limited (A.O. Smith Enterprises Ltd.); Bibby Foundry (Bibby-Ste-Croix); Pumps and Softeners Limited (Canature WaterGroup); Empire Brass Manufacturing Co. Limited (Emco Corporation): and Crane Canada Limited (Crane Supply).

DESCHÊNES EXEC AT THE HELM
Joe Senese, who is vice president operations with Groupe Deschênes was elected the 2017/2018 chairman of CIPH. Senese launched his career in 1982 working in the Engineering Group with Stelco Steel in Hamilton, ON. In 1984 he joined American Standard where he held various sales and sales management positions. In 1994 he joined Desco Plumbing & Heating Supply as vice president and general manager progressing to his current role with Groupe Deschênes in 2008.
ABC 2018 will be held at the Fairmont Chateau Whistler, BC, June 17 to 19, 2018. www.ciph.com