World Toilet Day is a day to raise awareness and inspire action to tackle the global sanitation crisis. Today, 2.4 billion people are struggling to stay well, keep their children alive and work their way to a better future – all for the want of a toilet.

The Sustainable Development Goals, launched in 2015, include a target to ensure everyone everywhere has access to toilets by 2030. This makes sanitation a global development priority.

In 2013, the United Nations General Assembly officially designated November 19 as World Toilet Day. World Toilet Day is coordinated by UN-Water in collaboration with governments and partners. 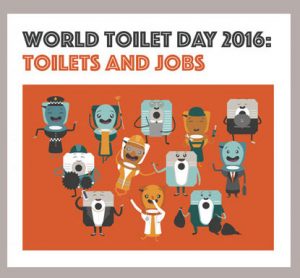 This year’s theme, Toilets and Jobs, focuses on how sanitation, or the lack of it, can impact livelihoods. Toilets play a crucial role in creating a strong economy, as well as improving health and protecting people’s safety and dignity.

A lack of toilets at work and at home has severe impacts upon businesses through problems in the workforce: poor health, absenteeism, attrition, reduced concentration, exhaustion, and decreased productivity. Loss of productivity due to illnesses caused by lack of sanitation and poor hygiene practices is estimated to cost many countries up to five per cent of GDP.

Investing in good toilets in workplaces and schools so that women and girls have clean, separate facilities can boost what is often referred to as the girl effect, thereby maximising the involvement of half the population in society.

The global demand for water and sanitation services is worth over $50 billion (Freedonia 2013), so there is a massive demand waiting to be met. Treating sanitation provision as a long-term business opportunity, as well as a fulfilment of people’s rights, could help speed up progress and attract investment.

In the 2014 UN-Water Global Analysis and Assessment of Sanitation and Drinking-Water (GLAAS), less than 20 per cent of participating countries have sufficient capacity to meet rural sanitation needs and even fewer of these countries have plans in place to redress this gap (UN-Water, 2014), which requires investments in education, curriculum development, and enabling environments.

Making it easy for people to set up sanitation businesses, as part of a bigger plan, will help entrepreneurs to flourish and could accelerate progress. Particularly in the towns and cities of low- income countries, populations are growing fast and their need for toilets and waste removal is already desperate. Small-scale service providers could play a vital role in getting toilets to people quickly and beginning the transformation of slum areas (WaterAid 2016).

• In the EU, there are more than 2.5 million jobs in the wastewater and solid waste management sectors (Ernst and Young 2006).