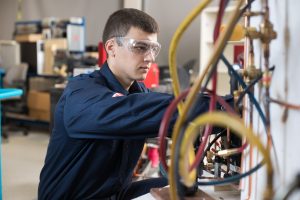 Ryan Matsuba placed fifth in the refrigeration and air conditioning category and received a medallion of excellence.

That’s how Ryan Matsuba describes the experience of competing with Team Canada in the WorldSkills International Competition. Matsuba won a Medallion of Excellence at the competition, which requires a score of 700 or more out of a possible 800 points.

This year, the competition, which Matsuba describes as like “the Olympics for the trades,” took place in Abu Dhabi, October 14-19. Held every two years, it is the largest vocational skills excellence event in the world. Canadian competitors are selected from the WorldSkills Canada contest, and similar competitions take place in 75 member countries and regions. The international competition boasted 1,300 competitors this year across 50 disciplines.

For the world competition in Abu Dhabi, Matsuba, who got his journeyman in refrigeration and air conditioning in June, made a miniature ice rink that included a heat recovery hot water tank. The project also included fabricating the heat recovery coil. He also had to install the components, wire it, do a pressure test, evacuation tests, charge it with refrigerant and commission it.

Matsuba placed fifth in the refrigeration and air conditioning category and received a medallion of excellence. There were 23 countries competing in that area.

“It was awesome,” he said of the experience. “I couldn’t say enough good things about Abu Dhabi. I met lots of people and learned a lot.”

“It’s been a great trip and great experience for sure,” he said. “I can’t thank everybody enough.”

The 2019 WorldSkills competition will be held August 29 to September 3 in Kazan, Russia.