Data Shows Most Communities Are Above Provincial Averages for Radon Gas

Radon gas is unstable and releases alpha particles, a type of radiation that is particularly damaging to lung tissues. 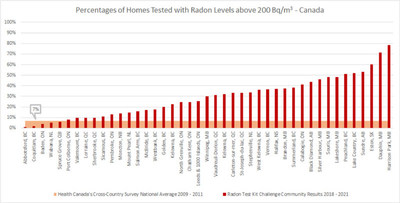 Figure 1 shows the results from all 43 communities in Canada that have taken part in the 100 Radon Test Kit Challenge, as compared to Health Canada’s national estimate. (CNW Group/Canadian Association of Radon Scientists and Technologists)

A Canada-wide citizen science initiative conducted over the past three years has uncovered radon levels well above provincial and national estimates.

A new report by Take Action on Radon (TAOR) reveals that the overwhelming majority of communities that have taken part in their 100 Radon Test Kit Challenge program are finding dangerous levels of radon are much more common than Health Canada’s national estimate.

Radon is an odorless, colourless, radioactive soil gas that is formed as uranium breaks down over time. Radon gas is unstable and releases alpha particles, a type of radiation that is particularly damaging to lung tissues. Radon is a problem across Canada as uranium is present in the soils and rocks of all regions. Also poses a problem indoors as it enters buildings from the surrounding soil through the foundation. Over time, radon gas levels can build up and exceed recommended guidelines, posing a health risk.

In 2012, Health Canada released a report summarizing their Cross-Canada Survey of Radon Concentration in Homes. This work, which measured radon in almost 14,000 homes, provided an estimate of the percentage of homes with radon levels above 200 Bq/m3 on the national, provincial and health region levels. Overall, Health Canada’s provincial averages ranged from 4 to 25%, and their estimated national average was 7%.

More information on radon can be found here: takeactiononradon.ca