It is time HVAC system design grew up

Recently Wilma Leung, my new favourite sage, and her progressive team from BC Housing-Homeowner Protection Office hosted 340 builders and affiliated service providers from British Columbia to participate in my class on thermal comfort for vulnerable populations. The program included passive cooling and solar control techniques for mitigating overheating risks during climate changes of consequence.

You do not have to be a climatologist or frontline healthcare worker to understand that aggressive thermal changes affect vulnerable populations. This is apparent from the heat-related morbidity and mortality reports increase across the planet.i Concern is specifically for infants, the infirm, the injured, elderly and others in palliative care environments. This group spends more time indoors, is unable to find refuge from the heat, and is unable to, or finds it difficult to adapt.ii

It would be naive for residential HVAC designers to observe this specific combination of demographics and climate change from the perspective of a spectator. That is because clients or their relatives have a high probability of entering one or more dimensions in the vulnerable category. Statistically most people will want to navigate that experience at home rather than in the confines of an institution. But consider the significance in choosing the indoor environmental quality and vigour of a modern healthcare facility versus that of a code-built house. A healthcare facility is designed to promote healing and built to function during environmental stress and/or failures in infrastructure. A code-built house by default is a satellite extension of the former but only designed to reduce the probability of illness. Arguably, code-built homes are designed for aesthetics rather than resiliency. The thing is, the last time I checked there was not any doctrine to say we cannot covet for our homes the quality environmental systems found in modern healthcare.

Setting aside the exceptions, residential HVAC designers employed in the distribution chain generally practice in a Peter Pan world where clients never become old, injured or sick. For the most part the residents’ potential palliative needs or needs due to changes in the earth’s environment are not even on the radar screen for discussion as builders frequently isolate the purchaser from the designer. By choice or direction, the majority of practitioners take a passive position within a segregated construction system; only a few become active participants on integrated design teams.

In the first scenario the design business follows the status quo, resigned to have zero influence on property schemes, architectural, interior and building systems. There is no motivation or there are obstructions to reaching out to the client to actually ask what problems they might want to mitigate if the home and/or occupants become at risk due to changes in health and/or the environment.

In this scenario the designer accepts the construction drawings as delivered to the office; load calculations are performed as per minimum requirements; and schematics are developed based on first cost rather than lifecycle cost. The specifications and equipment list are then prepared and sent out for tendering, where typically the lowest cost prevails. It is unfortunate but this represents the majority of residential design practices across North America, and for some occupants this ultimately creates a need for Tinkerbell and her pixie dust.

At the other end of the spectrum is the forward-thinking educated client who lives outside of Neverland and who is realistic. He or she is looking for that integrated HVAC designer to influence the architecture, building orientation and enclosure, and materials and methods of construction. This is the approach where significant differences can be made for and on behalf of the family.

Since we are in a climate where temperatures are rising, let’s look at some strategies and tactics that can be used to control overheating when people need comforting care environments during failures of one form or another.

First let’s state the obvious – the number one reason for overheating is a radiant problem – that is the shortwave high intensity solar energy absorbed by and transmitted into the building. Poor to no shading, inadequate enclosures and high window to wall ratios are the major culprits here. Second to this are internal loads created by the conversion of shortwave to longwave energy in relation to absorption and conduction; plus radiant (and convective) loads from people, lights, appliances and IT/entertainment equipment. All of the above raise the mean radiant temperature (MRT), which retards the shedding of body heat. Why we try to solve predominantly MRT problems with convective solutions is a testament to bad habits.

To solve the radiant problem you need to understand how the earth revolves around the sun and how that path affects the real estate being developed. There are many free online solar path tools but my favourites are those developed by Dr. Andrew Marsh.iii Figure 1 shows how that solar load on a random spot in western Canada on September 22 looks from outer space. Figure 2 is the sun path details for the same location, and Figure 3 illustrates the exposure and shading at the same location (late afternoon) for a hypothetical city populated by various building geometries. 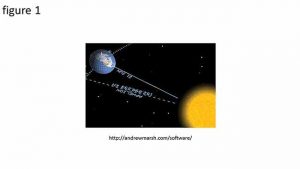 Figure 1 September solar load on a location in western Canada 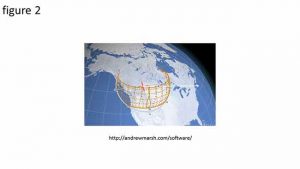 Figure 2 Sun paths over a location in western Canada 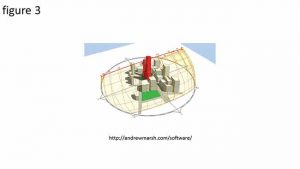 Now consider the sun paths and the solar irradiance at the earth’s atmosphere of about 1.36 kW/m2, of which approximately 1000 W/m2 makes it to the earth’s surface when measured perpendicular to the sun. Even when measured through various filters such as clouds and particulate at various altitudes throughout the year it is still a lot of energy that gets absorbed and transmitted into the building (see Figure 4). 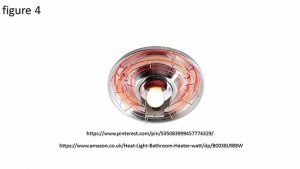 Figure 4 750-Watt heat lamp. Imagine one of these on every m2 of solar exposed surface. That is a lot of energy that is absorbed and transmitted into the building. If it is not controlled, it leads to an increase in the MRT leading to overheating of the occupants.

So, the first non-mechanical strategy to prevent overheating when “designing for failure” is to stop the shortwave radiation from hitting the building. Unfortunately, 100 per cent success would be equivalent to living inside a shaded bubble, which is neither desirable nor practical. Here are some practical tactics that the HVAC designer should be discussing with clients to eliminate or reduce mechanical cooling, or at the very least to enable peak performance from cooling equipment when absolutely needed.

Type a: A wall is the perfect window for HVAC engineers. It has a 100 per cent shading effectiveness and if built properly it is secure, does not leak, has a low thermal load and is effective at reducing air and sound pollution. Its only flaws are that you cannot see out of it and it lets no light in.

Type b: This is the project budget window: large, clear, no shades, cheap and lots of them.

Type c: This is the bare minimum window: double pane, single coating, no exterior or interior shades. Solar coatings are good but both b. and c. still allow short wave energy to hit 100 per cent of the glass surface area thus the 0 per cent shading effectiveness.

Type d: Getting clients to use exterior fins or inset windows puts you into a new league. They work on southern exposures and can work on some northeast and northwest exposures. Up to 70 per cent shading effectiveness.

Type e: Brise solei will put you in with the architectural crowd but only if you pronounce it correctly. This works on southern exposures but not the east or west. It works with windows that swing both ways (hoppers, awnings and casement windows)iv and provides up to 70 per cent shading effectiveness. 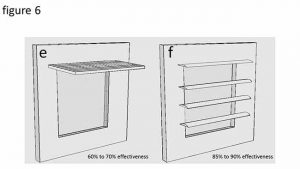 Type f: Horizontal louvres work on all exposures when adjustable. They do not work with windows that swing outward – only inward, sliders and double hung. They are more stable in windy climates, but can accumulate snow, bird droppings, and so on. They provide up to 90 per cent shading effectiveness.

Type g: Vertical louvres, as above except no issues with snow, bird droppings, and so on.v 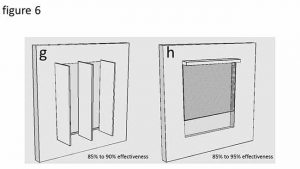 Type h: Roller shades, as above but providing better efficacy depending on the openness factor with up to 95 per cent shading effectiveness.

Type i: Venetian blinds as per g. and f. but better rangeability. Some types not suited for windy climates. They also do not work with windows, which swing outward only inward, double hung and sliders. Up to 95 per cent shading effectiveness. 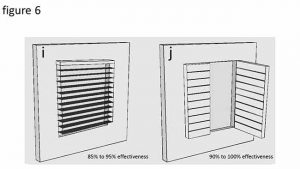 Type j: Shutters are still and always the classic solution. They do not work with windows, which swing outward only inward, double hung and sliders. Up to 100 per cent shading effectiveness.

These shading and ventilation strategies and tactics work on all building types using air-based systems, hydronic systems or hybrid systems. Take advantage of your local climate. Below grade soil temperatures are always cooler than above grade air temperatures. Use trees. Put window shades on the outside. Work window locations and selections into wind patterns. Nighttime naturally ventilated cooling works in many parts of the country. Low humidity, high air velocity and near naked works–just stay hydrated. If necessary, consider using non-compressor cooling methods as discussed in Cooling Without Compressors in HPAC May 2016.

If you still cannot convince your clients and their architects to employ these sustainable principles, we have been teaching our students to use the CBE Thermal Comfort Tool and its new solar calculator to shame them into submission. When it comes to architectural choices leading to overheating, guilt and reality are two gifts that keep on giving.

v Canadians deliberately put the letter “u” in the word mould and louvres. When Americans spell these words without the “u” it changes the entire meaning.