Understanding the added benefits that EM motors bring to the refrigeration industry.

Who doesn’t remember their first car? It’s one of those landmark decisions, and a rite of passage of sorts. With a single purchase, one goes from being dependent on the availability of your parent’s cars to get around, to complete freedom.

This was brought to mind as one of my sons purchased a car last week; his first set of wheels. To say he was excited would be a complete understatement. After the excitement of the first few hours wore off, the reality of acquiring insurance, paying for his own gas and maintenance, and of course registering his car hit him.

The day after he made his purchase, in anticipation of talking to insurance brokers, he asked me this question:
“Where do I find the car’s VIN number”?

Attempting to be the annoying/instructive parent, I responded with “You mean the Vehicle Identification Number Number”?

What is the point of this story?

Well, to further beat a dead horse, I’m reminded of the movie Mickey Blue Eyes. Certainly not an Oscar-caliber movie, but as a light-hearted romantic comedy, it provided a few good laughs. In it, Michael Felgate (played by Hugh Grant) is an English auctioneer who manages a prestigious auction house. He’s madly in love with his American girlfriend, Gina Vitale (played by Jeanne Tripplehorn). Early in the movie, Michael picks up Gina to take her to dinner. Knowing that her father owns a restaurant, he asks “Tell me what his restaurant is called, so I can sneak in, in a beard.”

Michael: “The La Trattoria means The The Trattoria”.

At this point, you…the reader…are probably really starting to wonder where this is going.
Well…you see.

Why don’t we first locate the VIN Number on my son’s car, head to The La Trattoria, and over lunch we can discuss ECM Motors … Arggggg.

Since ECM stands for electrically commutated motor, there is no need to refer to them as ECM motors, yet another redundancy I hear all of the time.

Additionally, the controller has the ability to modulate speed.

There are several benefits in using EC motors: 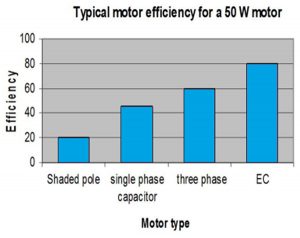 Using those efficiencies, one can calculate the power requirement for a given size motor. A motor that is operating at 20% efficiency will require 5 watts of power for every watt of motor output (1 ÷ 20%).

The additional 4 watts (per watt of motor output) is transformed into heat energy. If this is an evaporator fan motor, that heat is transferred to the refrigerated space, and this must be accounted for when determining the refrigeration heat load, which is used to size the equipment.

In addition to potentially requiring equipment with higher capacity, this extra heat load will require that the refrigeration equipment operate longer to remove the heat.

The Motor Type chart (Figure 2, below) quantifies the power requirement and heat added to the refrigerated space for the following motor types: (1) shaded pole (SP), (2) permanent split capacitor (PSC), and (3) ECM. Clearly, the ECM is the most efficient choice.

Now, let’s look at an actual application and see what and where the benefits are. This is a small grocery store with two frozen food walk-in boxes, each rated at 22,000 Btu. The equipment selection is as follows: two – 5.5hp scroll condensing units and two six-fan low profile evaporators

The chart above (Figure 3) quantifies the power requirement and heat added to the refrigerated space for this specific application, comparing the standard PSC motors with ECMs. Again, the ECM is the most efficient choice.

Now, the savings shown above are only part of the story.

In addition to the higher efficiency (lower energy consumption) benefit of ECMs, there are additional benefits. The more efficient ECMs add less heat to the refrigerated space. The reduction in heat load results in reduced equipment runtime. (Savings)

One equipment manufacturer has modified its evaporator ECMs such that when the temperature in the refrigerated space is satisfied, the SPDT switch in the thermostat will simultaneously break the circuit powering the liquid line solenoid valve, and also make the circuit to a third terminal in the ECM circuitry. This provides a signal that reduces the motor speed, and more importantly reduces the motor’s power consumption to 13 watts. (Savings)

The combination of the EC condenser fan motor, and the motor speed controller, allows the motor to vary its speed under varying ambient conditions to maintain very precise liquid pressure. This optimizes performance by maintaining stable liquid pressure via an efficient ECM operating at reduced speed/power consumption. (Savings)

Is there any question as to why OEMs are offering ECMs on their refrigeration equipment? None at all.
The fact is, this superior technology results in energy and cost savings in many ways. <>