How to properly apply a TEV for a given application

In my travels I have many opportunities to visit and interact with HVAC/R contractors. In the course of these visits, a frequent topic of discussion is refrigerant conversions. After the typical “what’s the best replacement for R-22”, and “do we really need to replace all of the elastomer seals” (answer to that question is YES), a frequent question is “If I’m using this particular refrigerant, can I use the R-22 TEV? ”

The TEV, as a superheat control, which regulates refrigerant mass flow at the evaporator inlet, also performs the function of converting the liquid refrigerant from a high pressure to a low pressure. In a typical system where the four major components (compressor, condenser, TEV, and evaporator) are properly sized, the resulting low pressure liquid entering the evaporator should be at a saturation temperature that will be close to the design evaporator condition.

When discussing whether the TEV will require replacement with an R-22 alternative, the same question should be asked in regard to the refrigerant distributor nozzle. Figure 1 (top) shows a properly sized refrigerant distributor and TEV for a 10 ton Air Conditioning system, utilizing an eight-circuit evaporator and operating at the following conditions: 45F SST, 105F SCT, 5F subcooling. For this particular application operating at the specified design condition, an eight-circuit distributor with ¼ in.feeder tubes and a #10 nozzle is selected. This is paired with an OVE-10-GA TEV. 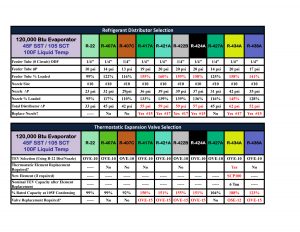 The chart then assumes a conversion with each of the refrigerants shown, and using the existing distributor tubes/nozzle, and TEV. How those existing components fare with the new refrigerant is reflected in the chart. A distributor tube/nozzle combination that is operating at greater than 150 per cent of rated capacity (or with a combined pressure drop in excess of 50 psi) is considered undersized and should be replaced. The appropriate replacement, if necessary, is shown in red. Likewise, the chart also shows the respective percentage of rated capacity for the existing 10 TEV, when used with each of the refrigerants shown.

In addition to looking at the percentage of rated capacity with each R-22 replacement, it is important to know whether the pressure-temperature characteristics of the refrigerant will allow the R-22 thermostatic element to be used. While most of the common R-22 replacements have a pressure-temperature relationship that is close enough to R-22 such that the existing thermostatic element can be used, there is one exception on the chart; R-434A requires an R-404A thermostatic element. When replacing the R-22 element on the OVE-10 with an R-404A element, this valve now becomes a nominal six-ton valve.
AVAILABLE PRESSURE DROP
The distributor tubes and nozzle for the R-22 system are sized such that they are both operating below 100 per cent of their rated capacity, with the tube/nozzle combination operating with a combined 33 psi pressure drop. As stated above, one of the factors effecting TEV capacity is the amount of pressure drop experienced through the valve’s port. Since there is a finite amount of high to low side pressure drop available, if the amount of pressure drop through the distributor tubes/nozzle increases, it reduces the amount of pressure drop available to the TEV port.

So, while the increased mass flow requirement of some of these R-22 replacements (as compared to R-22) will alone require upsizing the TEV, the fact that there might be an additional 20+ psi of pressure drop through the distributor tube/nozzle combination (meaning that there will be a corresponding reduction in pressure drop through the TEV port) further necessitates replacing the TEV.

The real takeaway with this is that there is no standard answer as to whether the TEV will need to be replaced when converting from R-22 to one of the many available alternatives. It is safe to assume that converting from R-22 to R-407A/C, or R-427A will not require a TEV (or refrigerant distributor nozzle) replacement. For the other refrigerants shown in Figure 1 (bottom), the existing TEV and distributor nozzle must be analyzed with the prospective new refrigerant to see if replacement is required. While the properties of the refrigerant will play the larger role in this determination, how the existing components were selected will also be a factor. For example, if a 12-ton TEV was selected to be used with the original R-22 equipment, it would have sufficient capacity when used with R-438A. While it is not always easy to ascertain which TEV or distributor nozzle model is in the existing piece of equipment, this information is crucial in determining whether either of these components will require replacement.
There are many factors that should be considered when determining the R-22 alternative refrigerant:
* System Capacity compared to R-22
* Price and availability of the R-22 alternative (refrigerants under patent are typically more expensive and less widely distributed)
* Environmental impact (GWP)
* Compressor oil requirements
* Cost and complexity of the conversion
It is the last bullet point that should be given its due consideration. Choosing a refrigerant such as R-407C for an R-22 AC conversion will eliminate the need for a TEV and/or distributor nozzle requires replacement, which will result in a less expensive and less complex conversion. 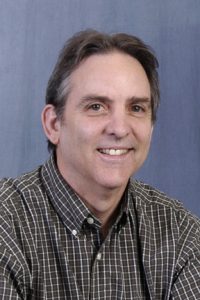