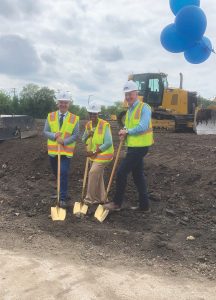 Mifab has been a family owned manufacturer of engineered plumbing and drainage solutions since 1982, and on August 6 the company celebrated the groundbreaking for its 68,000 sq. ft. expansion in Chicago, IL. The planning for the expansion began just over a year ago and has an expected completion date of January 2020.

At the ceremony Mifab president Michael Whiteside expressing his gratitude to everyone who has played a crucial role in the expansion, including longtime Mifab employees. Mifab was first headquartered in Canada and moved to the U.S. in 2006.

In addition to the already massive 60,000 sq. ft space, the new expansion will house some of Mifab’s growing product lines, such as HDPE plastic interceptors that range from holding tanks of 75 to 2,000 gallons. The new space will also provide additional distribution space and testing for BEECO Backflow Preventers.

Whiteside concluded the ceremony with high hopes for Mifab’s future. “This would all not be possible without the team spirit that we have at Mifab, the support of Alderman Austin’s office, and the Charles Hall Construction team. Thank you very much for being here to celebrate this moment with us,” said Whiteside.