BC contractor honoured for support of apprenticeship and trades training 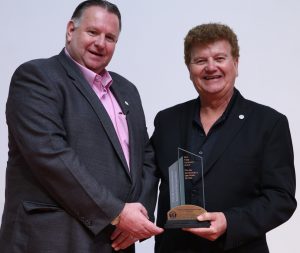 The 2016 CCA Trade Contractor Award of Recognition has been awarded to Patrick Waunch of Rambow Mechanical in Kelowna, BC, for his infectious enthusiasm and dedication to the growth and improvement of the industry, the association and the trade contractors council. The award also recognizes his time and dedication to the Canadian Construction Association Trade Contractors Council.

Waunch shines a spotlight on the trades and works tirelessly to encourage growth in apprenticeship programs. He oversaw and contributed to the update of a resource that clarifies the prospective responsibility that trade contractors may be assigned vis-à-vis design in CCA 53 A Trade Contractor’s Guide and Checklist to Construction Contracts, and led the development and adoption of the CCA policy statement on the naming of subtrades. In addition to being the past chair for the CCA Trade Contractors Council, Patrick chairs the Canadian Design-Build Institute’s Trade Contractors Committee.