So, picture this: you’re kneeling in wet grass next to a clean out, shoving your Gen-Eye pipe 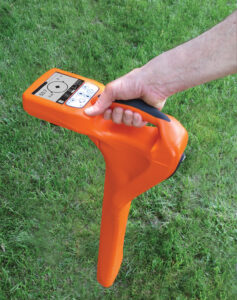 inspection system slowly down into the drain. The push rod is stiff but slippery; just flexible enough to permit you to negotiate the 90-degree turn at the bottom of the clean out and then coax it in the direction of the street. The yard seems to be approximately the size of Rhode Island, with a driveway, several trees and an overgrown but earnest attempt at landscaping between you and the property line. The customer’s toilets and drains have been backing up almost every time that it rains, and you’ve confirmed that everything between the house and the clean out is flowing normally. Your problem lies under the front yard, and it certainly involves a broken or leaking pipe. In a flash of insight, it occurs to you that you are propelling a video camera into what is certainly a damaged sewer pipe. What could possibly go wrong?

Plenty, it turns out. Although this imaginary scenario seems relatively safe and controlled compared to some camera applications that I’ve heard about over the years, contractors damage their inspection systems in situations like this every day. It’s easy to do and expensive to correct, so let’s take a look at the two most usual suspects and see what we can learn.

Are there other calamities that can befall your camera system besides these two? Absolutely. From kinking the push rod a hundred feet down the line to accidentally cutting off the camera head when sawing through the pipe, there are dozens of problems that can pop up in the life of a camera system. However, addressing the above will greatly decrease the odds of having a camera-related mishap ruin your day.

Over the years we’ve noticed that some contractors never break their camera systems, and others seem particularly hard on them. Most drain cleaners and plumbers fall in the middle range, experiencing occasional problems. The important take away here is that repair centers see a clear relationship between technique and frequency of repairs. Live and learn!

For more information on any of our innovative pipe inspection cameras, call the Drain Brains® at General at 800-245-6200, or email us at info@drainbrain.com. You can also request literature on any of our handy sewer camera systems right here. View our sewer cameras for professional use by following this link. Lastly, find a distributor near you where you can buy our rugged diagnostic tools as well as our other drain cleaning equipment.