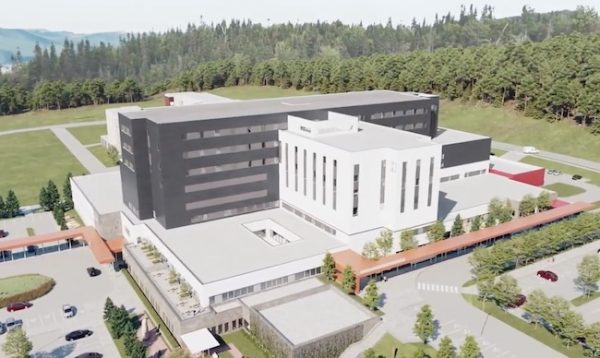 A rendering of the new hospital, which will use geothermal technology PHOTO: Government of Newfoundland and Labrador

Newfoundland and Labrador has signed off on a $750 million contract with the Corner Brook Health Partnership consortium to build an acute care hospital on the west coast of the island.

St. John’s, NL-based Cahill Group and Plan Group, headquartered in Toronto, will serve as the mechanical-electrical contractors for the project. Johnson Controls will head up facilities management.

The building, which will replace the aging Western Memorial Regional Hospital, will incorporate a geothermal system. The technology will be more costly than standard electric heating, but Plenary Group said it offers greater sustainability benefits and long-term energy savings.

Opting for geothermal will also allow for optimization of the hospital’s energy performance, allowing it to potentially achieve LEED energy points, according to Plenary Group.

Over the course of construction, the province estimates 4,000 person years of employment will be created.

Work on the hospital is expected to get underway later this summer and wrap up in 2023.

Watch to see the design for the hospital: