The value of residential permits declined 6.4% to $6.5 billion nationally in October. 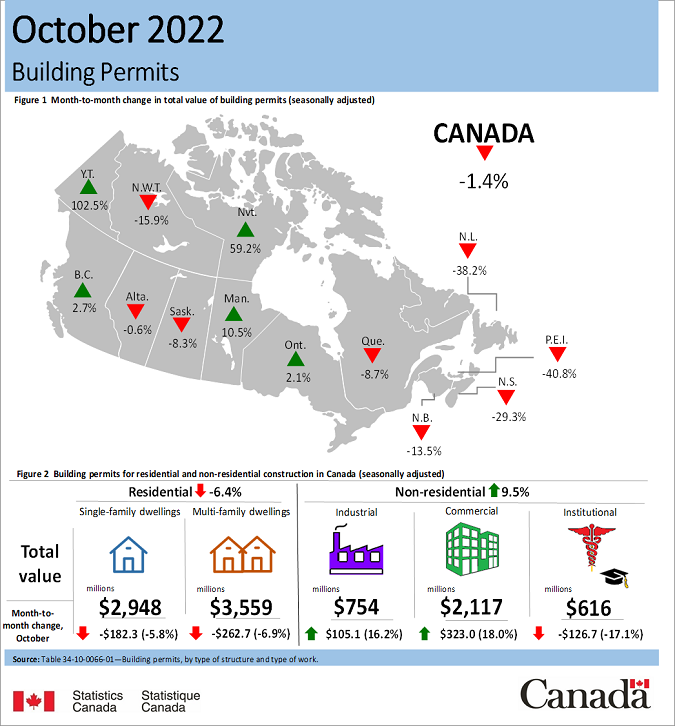 Statistics Canada has announced the total value of building permits in Canada declined 1.4% in October to $10.0 billion. Losses in the residential sector more than offset gains from the non-residential sector.

The value of residential permits declined 6.4% to $6.5 billion nationally in October. Similarly, the number of new residential units decreased 4.6%, mainly due to single-family homes (-9.3%) which fell for the fifth consecutive month.

The value of building permits in the multi-family component decreased 6.9%, with Ontario posting its second consecutive decline after reaching its peak in August. Nova Scotia also recorded a large decline following its record high in September.

The total permit value of the non-residential sector increased 9.5% to $3.5 billion in October.

Construction intentions in the commercial component sharply increased by 18.0% in October. Ontario posted the largest gain, with multiple projects valuing over $20 million, while in September, one permit was reported above this level.

The value of building permits in the industrial component sharply increased by 16.2%, largely due to Ontario, which reported a $114 million permit for a water/sewer project in Erin. New Brunswick also posted notable gains, with three projects valuing over $5 million each.

The institutional component continued to slow as it dropped 17.1% in October, following a 38.2% decrease the previous month, reaching its lowest value since May 2020.