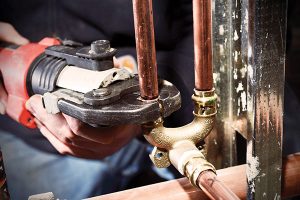 Minimizing bacteria growth in plumbing supply systems has become increasingly important in the plumbing industry in recent years. This is done largely through the control of temperature and flow maintenance. Plumbing engineers, installers and facility operators are particularly concerned with Legionella, a waterborne bacterium that causes a very serious type of pneumonia called Legionnaires’ disease.
In the U.S., up to 113,000 people are infected with the Legionella bacteria each year. In Canada, the average number of reported cases of Legionnaires’ disease is generally less than 100 per year. However the actual number of cases is thought to be much higher, as many people with pneumonia may not be tested for infection with Legionella.¹
Two of the biggest culprits of water-borne illnesses are stagnation and improper water temperature. Stagnation in water distribution systems is a problem in most modern buildings, but it is a larger problem in healthcare facilities where immunocompromised patients can be found coexisting with piping dead ends and inconsistent occupancies that lead to periods of stagnation. Stagnation can lead to a buildup of biofilms and pathogens which can ultimately damage the system, causing health problems for those exposed.
With continuous (or even intermittent) flow, there is an exchange of fresh water which reduces stagnation in the system and helps keep water closer to the desired temperature. Even with recirculation, stagnation can occur in dead legs because of the lack of water exchange. By maintaining water flow and keeping temperatures out of the Legionella growth range, engineers and installers can greatly reduce the risk. Viega has several options to help with water quality issues.
MAINTAINING TEMPERATURE CONTROL
Legionella is unable to reproduce or live at temperatures above 131F. The issue is complicated by the biofilm in which the bacteria may live. Because it is a protective insulating film, bacteria within the biofilm may not be subject to elevated system temperatures. (Thermal disinfection is not recommended in the update of Guideline 12 which is out for public review).
Hot water and hot water recirculation piping should be insulated to prevent excessive heat loss. Depending on the ambient temperature near the piping, insulating cold water piping may also be considered. All plumbing should be installed in such a way as to minimize heat transfer between pipes at different temperatures. Grouping well-insulated pipes of similar temperature together can further reduce unwanted heat transfer that could place water in prime temperature range for the proliferation of Legionella and other waterborne pathogens.
MAINTAIN FLOW
Maintaining flow offers several key benefits for plumbing systems. First, water in motion can make it harder for bacteria to establish itself along the pipe wall. Second, stagnant water that has cooled is displaced with higher temperature fresh water from the heating source, making it easier to maintain temperature. Additionally, if chemical disinfectant has been used, water moving through the system will flush it out.
RECIRCULATE
Dead legs can result in stagnation, because the water trapped in a dead leg is not subject to flow for extended periods. Once stagnant, water temperatures will reach that of the surrounding environment, which, in most cases, lies exactly in the temperature range conducive to Legionella colonization.
One way to promote a consistent supply temperature in a hot water system is to use recirculation. If balanced so that all parts of the system are subject to the design flow rate calculated to offset heat loss, this strategy can work well for risers and mains.
Branches and dead legs can pose a challenge for maintaining specific water temperatures, even with the use of a recirculation system that maintains temperature in risers and mains. It’s not always possible to recirculate branch lines. It’s even less likely to be able to recirculate drops serving fixtures. This means that in a branch-and-tee system, dead legs are inherent to the design.
There are several effective recirculation strategies that help minimize dead legs, one of which is to pipe individual fixtures in series. In other words, installers should daisy chain one fixture to the next. Using flow-through fittings in a series installation compared to standard branch-and-tee moves the tee closer to the fixture, reducing the potential for stagnation in supply lines of unused fixtures.
With the most used fixture at the end of the series, anytime that fixture is used, it causes flow in the remaining fixtures upstream up to their point of connection whether they are used or not. What would normally be served by a dead leg because of non-use would now see flow through normal occupant habits even if that fixture itself is not used.
If the most-used fixture is not known, the group of fixtures could be fed from two different directions, resulting in a ring. In this way, any fixture used on the ring will cause flow from both directions regardless of how close the fixture is to the branch, minimizing stagnation for a bank of fixtures.
Design and installation professionals should consider all options to minimize the potential for risks to occur in the first place. Consider using double drop elbows, Venturi press inserts, or an internal recirculation system to reduce water waste and increase energy savings while maintaining temperature, meaning users not only reduce the risk for bacteria, but also save money and water in the process.<>