What you need to know about the industry workhorses 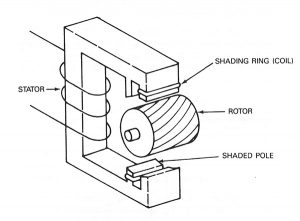 Thus, 60Hz x 120 = 7200/6 should result in 1200 rpm; however, slippage means the motor turns at 1075 rpm. A considerable amount of waste heat is the byproduct of slippage. PSC motors start abruptly adding stress to internal motor components and noise to the air handling system. Multi tap PSC motors must be carefully matched to the application as only minor changes in speed are possible.
Electronically Commutated Motor (ECM)
In the last two decades, several electric motor manufacturers, including Genteq and Emerson introduced fractional horsepower variable speed ECMs touting a wide range of benefits such as:
• Incorporating a separate motor that is wound like an industrial three-phase motor with a computer that “decides” which winding to power at exactly the right time thus optimizing efficiency.
• The rotor consists of three permanent magnets so no energy is wasted in creating an armature magnetic field; rotor losses are very low; goodbye slippage.
• Emerson’s serial port communicating ECM uses 10 poles
• The motor computer, housed in a replaceable module, can control torque over a wide range of applications; provides a much wider range of airflows between lowest and highest settings.
• The motor computer “knows” the rotor position allowing control without the need for mechanical brushes and commutators.
• Motor starts softly, ramps to proper speed.
• Under standard residential operating conditions, a variable speed ECM is typically 40 per cent more efficient than a PSC motor.
• ECMs used with furnace fans are optimized to provide constant air volume should the external static pressure change for some reason.
Constant Torque Motor (or X13 Motor)
Think of CTMs as the next generation PSC motors. The non-ramping CTM motor programming is optimized around providing a consistent rotational force. Should the system external static pressure change due to a restricted air filter, for example, then the motor program will maintain its programmed torque although airflow will decrease, but not as drastically as a PSC motor in similar circumstances.
CTMs reduce power consumption compared to a PSC motor, have soft start capability, and provide multiple speed taps providing a level of torque suitable for varied applications. The motor interface, simpler than that of an ECM, receives analog 24-volt turn-on instructions to the appropriate motor speed tap by the furnace or air handler control board.
Inverter Drive
Many high efficiency heat pumps and cooling units feature a variable speed hermetic scroll compressor powered by an inverter or variable frequency drive that alters AC power by changing it into DC power. Then, using diodes and capacitors, the converted DC power feeds the appropriate motor windings in the compressor at the right time in a similar fashion to the ECM fractional horsepower motor. Inverter drives are continuously variable, brushless DC motors driven by a switching frequency typically ramping some motors from 900 rpm to as high as 6000 rpm based on load. Variable speed drives incorporate protection and monitoring functions that continuously adjust compressor operation preventing undesirable operating conditions and situations that could damage the compressor.
NOTE: ECM motors and inverter drive compressors could cause personal injury or death due to electrocution. Be sure to understand and follow the manufacturer’s instructions before touching electrical components.
IT IS ALWAYS SOMETHING
I said it once before: air is a commodity, it has weight. One cubic foot of air weighs approximately 0.075 pounds. A blower moving 1000 cubic feet of air per minute will move 0.075 x 1000 = 75 pounds of air per minute or 4500 pounds (2.05 metric tons) per hour. Suppose a dirty air filter restricts air entering the blower by 50 per cent or 37.5 pounds per hour. A PSC motor simply unloads, current draw decreases. However, a constant volume ECM will ramp up in a futile attempt to maintain programmed airflow. ECM powered fans, starved of air, will simply move whatever they can get at a higher velocity. Motor wattage increases considerably, blowing AHRI rated SEER and HSPF numbers out the window.
ECMs, often promoted as a method of easily overcoming airflow problems, typically operate well beyond rating plate maximum external static pressure in second-rate duct systems. Consistent high static operation of an ECM rated for a total ESP of 0.5″ often results in control module failure. My recommendation: do not specify an ECM unless the duct system warrants.
The introduction of ECMs and Inverter Drives created some significant concerns about power quality for electric utilities maintaining the grid. In HRAI’s National Review in 2012, it was noted that “The need to control the speed of a motor by manipulating its frequency or voltage has introduced a host of electronic components that introduce waveform distortion (harmonics) into the power distribution systems.”
It will be a long time before expensive ECM12s and Inverter drives begin to surpass the enviable record of low cost, low maintenance and highly reliable PSC motors. Undoubtedly, this technology will prevail and we must become accustomed to it.
I like comedian Dave Barry’s amusing technological insight, “…scientists have developed the laser, an electronic appliance so powerful that it can vaporize a bulldozer 2,000 yards away, yet so precise that doctors can use it to perform delicate operations to the human eyeball, provided they remember to change the power setting from [bulldozer] to [eyeball].”