I had not had much to do with the concept of a hybrid anything before landing in the HVAC industry many decades ago. After a few years of learning about disparate topics stretching from gas heating to residential cooling, it was my wife, a green-thumb gardener, who introduced me to hybrid plants in a “by the way” point of interest fashion. She had planted some Hollyhocks next to a Rose of Sharon shrub in our tiny backyard garden. Mother Nature worked her magic giving us a wonderful hybrid Rose of Sharon shrub incorporating its own gentle mauve coloured flowers surrounded by gorgeous red hybrid hollyhock blooms the following growing season. Although the hybrid shrub did not exactly appear on her garden plan that year, the end result made my wife the envy of the neighbourhood.

Thus, a dictionary defines “hybrid” as something “related to or produced from parents of different species, varieties or breeds” such as our Rose of Sharon/Hollyhock shrub. A further definition states a hybrid has “two different types of components performing essentially the same function” such as a hybrid vehicle.

Today, the term is widely used in many fields (perhaps overused), to describe a myriad of technological wonders.

Thanks to the oil embargo put in place against the United States by OPEC in 1973, devices that promised to save on heating and cooling costs for residential consumers proliferated on a grand scale. By the time the AHRI (then known as ARI) had defined the North American climate zones, air source heat pumps started to appear in Canada. That is when, in the early 1980s, I was introduced to the concept of a hybrid heat pump (HHP) sometimes called a dual fuel heat pump. Ideally, an HHP would save energy by utilizing its ability to generate considerably more useful heating watts-out than the watts input required to run the system.

However, as I have said before, HHPs and the companion all-electric heat pumps did not perform well in Climate Region V. I have discussed these issues in previous articles: sizing mistakes, siting errors, ineffective defrost controls and low temperature rise among others. In a hybrid application, there are two control strategies that often get confused: 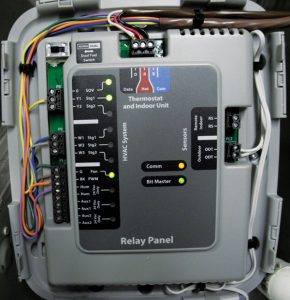 This relay panel allows a digital thermostat to communicate with 24 volt equipment and accessories.

Another critical component of hybrid control is the outdoor temperature sensor (ODS). Long known on the hydronic side of the HVAC industry as an outdoor reset control, an ODS helps the smart thermostat to adjust the output of a modulating or multi-stage heating device to more closely match building heat loss. Outdoor sensors are very accurate providing temperature data within a +/- 1 per cent variance. Thus, the sensor must not be influenced by direct sunlight or other sources of heat. Depending on the manufacturer, a failed ODS might simply generate a non-critical error alert (similar to the automotive “service engine soon” light) or possibly force the system into an emergency heat mode. Thus, the ODS has become a very important hybrid component.

HYBRID IS THE NEW CONVENTIONAL

When I first started in HVAC, a conventional residential forced warm air system (FWA) or boiler did one thing: heat. Many of the older oil-fired FWAs I encountered worked very well. Typically consisting of an easily accessible centrally located furnace, beautifully laid-out and properly sized ductwork, these single zone systems provide quiet, even-heating. As the post-war housing boom expanded exponentially, FWA heating became more of a nuisance for builders having to accommodate duct systems and provide chimney chases. FWA systems occupied too much space in the “unfinished recreation room.” Efficient, comfortable HVAC became the exception rather than the rule.

One could argue that the first act of residential hybridization saw the addition of central air conditioning to FWAs meant strictly for heating. Then, the first iteration air source heat pumps (ASHP), totally unprepared for cold climates as it turned out, introduced the concept of hybrid HVAC allegedly under the guise of saving energy. As I’ve mentioned before, far too many FWA’s struggled to simply provide decent heating never mind saving extra energy. Lost in the early hybrid ASHP invasion was the notion of comfort. The glossy brochures showed mom and dad and the kids happily frolicking in the family room, yet there was an entirely different comfort story going on upstairs in January and July. 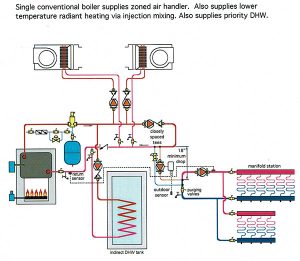 Therefore, by my definition, a hybrid HVAC system uses one or more sources of heat (or cooling) to provide independent space comfort conditioning and can be combined with accessory heating capabilities. Here are but a few examples:

1. A condensing boiler supplying a priority indirect domestic hot water tank and two zoned air handlers. Add some injection mixing to supply lower temperature radiant heating and maybe include some other accessories like panel heaters or even garage floor warming. Better yet, send the heated water to a hot water coil incorporated into a small duct high velocity system. Utilizing the principle of aspiration, rooms so serviced will have superior air mixing throughout the year providing ideal comfort. 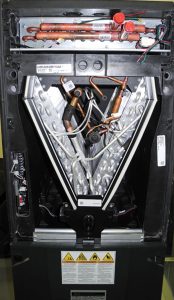 (Above and below) A multi-function VS air handler with a hot water coil and heat pump coil installed. 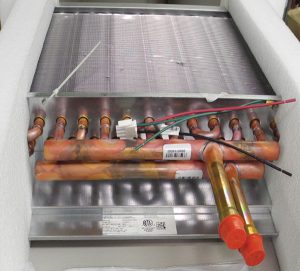 For several decades prior to 1973, energy was fairly inexpensive and relatively abundant. When energy became expensive, seemingly overnight, counter remedies seemed too often to be hit or miss in so many ways:

Far too many hybrid ASHPs rarely worked properly having never been designed for a northern climate. Many ASHPs were simply converted to cooling-only operation allowing the primary heating source to do all the heating heavy lifting.
Decades of technological innovation has solved many such problems. While house builders could have sealed-up and better insulated their products back in the ’80s, the technology needed to deal with excess moisture has only really been available and put to good use in the last decade or so. All those old cars and all those clunky old furnaces are gone now; however, the houses still exist. Many, many of them have been retrofitted or renovated, perhaps more than once.

The fact remains that unless the heating system fell into the hands of a qualified heating contractor, the comfort and efficiency equation is still unbalanced in so many Canadian houses. A hybrid system, in my opinion, promises to deliver the necessary and very comforting Btus to where they are needed in a timely fashion. Again, hybrid is the new conventional. <>