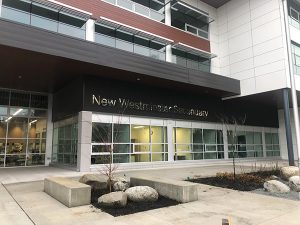 Considered one of the largest and most complex school projects in the history of British Columbia, the New Westminster Secondary School opened its doors to students for the first time Monday, January 11, 2021.

It is the second largest secondary school in B.C. and the new educational home for approximately 1,900 students in grades 9 through 12. The facility also serves as a community space for local New Westminster residents.

The project, the largest single school investment in B.C. Ministry of Education history, has been several years in the making. The original high school, built in 1949, was outdated and found to be in need of seismic remediation. Funding for the project was announced in June 2016, and the $106.5-million contract was awarded to Graham Construction and KMBR Architects in Dec. 2017. Integral Group, a design firm focused on sustainability, was selected to lead engineering and design for the new state-of-the-art learning facility constructed next to the existing school. Surrey, B.C.-based Division 15 Mechanical was the mechanical contractor on the project.

Designed with the Future in Mind

Eunice Doroteo, senior engineer with Integral, began working on the project in 2017, designing the mechanical system using a low-temperature heating water loop. This would most effectively allow the project to achieve energy efficiency goals with the ultimate goal of achieving LEED-Gold certification.

“This job is very important to our team,” said Doroteo. “The children and families of New Westminster have been waiting for it for a long time and we are excited to provide them with a building that serves the whole New Westminster community.”

The mechanical system employed uses three large 3,500 MBtu high-efficiency condensing boilers to heat the 16,390-square-metre school. And an air separator removes any air in the system, which serves thousands of feet of hydronic convectors throughout the school.

Low greenhouse gas emissions are very important on this project, and the condensing boilers must be operating with return water temperatures below 100F (38C) to maintain rated efficiencies. Every convector selected for this project was sized with the low return temperature in mind.
There wasn’t an unlimited budget, so the heating solutions also had to be cost effective. The convectors used throughout the school proved to be the answer as they are cost effective while allowing for heat output with low water temperatures. 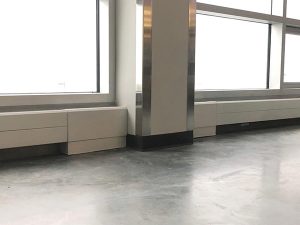 Low-temperature convectors along the perimeter of the school’s classrooms with covers to hide the piping.

Climate Control in the Classroom

All classrooms use the low-temperature convectors along the perimeter, mounted within a casing, including covers so there is no exposed piping.
In addition to reducing the energy consumption, the units react quickly to internal heat loads. So, when students arrive in the morning, the units ramp up until the desired temperatures are reached. Just as with lighting, where you flick the switch and the lights turn on. It’s the same principle with these low-temperature convectors in the classroom—there is no reason to heat a classroom when it is unoccupied when you can provide almost instantaneous heat on demand.

In larger spaces, such as shops and the theatre, engineers specified unique unit heaters that operate on the existing low-temperature heating water loop.

“We wanted a product that fits in a space with extremely high headroom, but the challenge is finding a heater that has enough capacity to make sure that occupants at lower levels would be comfortable,” said Doroteo. “We also wanted something with a nice finish.”

The unit heater selected features a technology that generates quick, powerful airflow with even temperature distribution. It does this by reducing the return temperature, which reduces stratification and the amount of cold air build-up at the ground level. This means shorter operational times and greater energy savings.

The product would also need to fit the school’s stringent acoustic requirements. This required all of the mechanical equipment to be less noisy. The use of EC motors in the unit heaters means there is very little fan noise along with 90% less electrical consumption when compared to traditional motors.

“The unit heaters installed are the quietest I’ve ever seen in my career,” said Doroteo. “Even though they are shops, they are still teaching spaces. That means when they’re not doing any activity, the teacher is still providing instruction. Having a quiet mechanical system reduces the background noise to facilitate better learning.” 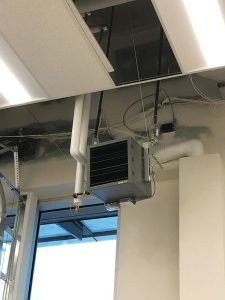 Larger spaces like workshops and the theatre use low-noise unit heaters.

In addition to shops, unit heaters were placed in janitorial closets to prevent pipes from freezing, in weight rooms and art galleries throughout the building. A total of 37 units were used, which reduced the amount of space required from similar systems.At entry and exit ways throughout the school, force flow cabinet style heaters provide individualized room temperature controls. 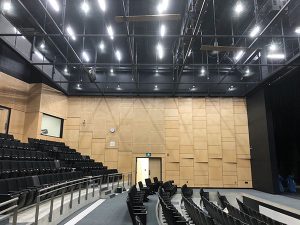 The school’s theatre has low-temp water convectors installed just above the wall panels on the side wall.

The facility was initially scheduled to open in September 2020, but COVID-related delays that included general workforce reductions caused setbacks along the way. Despite these challenges, the building opened with minimal delay.

“Students deserve to learn in modern and inspiring learning environments, and I am so excited that will now be the case for secondary school students in New Westminster,” said Jennifer Whiteside, Minister of Education in a government release a day after the school’s recent opening. “This new school is so important for our community, and I know that families in New West are thrilled to have a new, state-of-the-art facility that will benefit students for generations to come.”