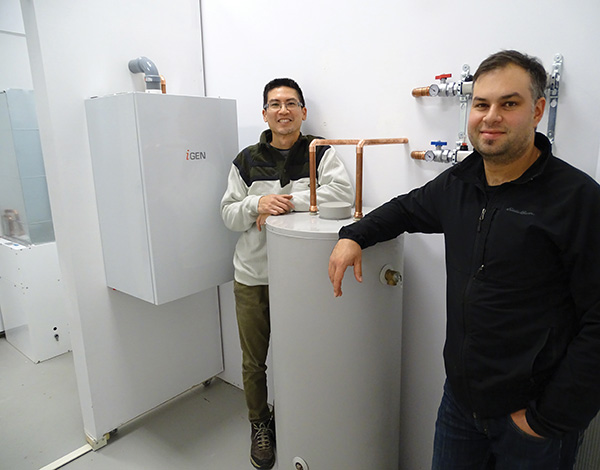 “We like to consider ourselves a technology company—not like an Apple or Facebook—but relative to the HVAC industry, we see ourselves on the high-tech side,” says Patrick Lai, one of the co-founders of iGEN Technologies, a Canadian company that has developed a unit, about the size of a typical wall-hung boiler, that will provide heat for a modest-sized home and generate enough electricity to be self-sustaining.

The two founders, Lai and Michael Chatzigrigoriou, are Ontario-based mechanical engineers who initially met when working together at a small HVAC consulting firm. The two joined forces to launch their own HVAC consulting engineering business, which then led to forming iGEN Technologies in 2012. “We literally started in Michael’s garage” notes Lai, the classic high-tech origin story.

The initial driving force was to create a technology that would enable homeowners to get off the grid. Based on their combined engineering backgrounds and specific HVAC knowledge they wanted to build an appliance that could be practical and affordable.

As air conditioning units have become ubiquitous, Lai explains that if you take the typical components of an air conditioner (compressor, heat exchanger, and refrigerant piping), and you run the process backwards—not reversing the flow like a heat pump but actually apply high temperature heat to the process—you can get power out.

He draws a comparison to how large nuclear generating stations operate, where inside you have a steam Rankine cycle and high-pressure steam drives a turbine connected to the generator which outputs electricity. The steam then runs through a condenser, returns to liquid form, and the closed-loop process continues. Essentially, they’ve reproduced the Rankine cycle inside a gas-fed module to produce heat and electricity for a house (see “How it Operates” below).

From 2012 to 2017 the duo conducted a lot of research and development, moving out of the garage and into an office space in Markham, Ont. After initial gas furnace-like prototypes, they looked at the trends leading towards high-efficient hydronic heating solutions and began experimenting by placing their heat and power module within the casing of a tankless water heater and coupling that with an air handler.

Then, in April 2018 iGEN Technologies acquired assets of UK based Flowgroup, including patents and inventory related to that company’s micro combined heat and power (micro-CHP) boiler technology.

“It was a deal that made sense for us,” says Lai, “Because they were manufacturing something very similar to what we were doing, the only difference was they had a 10-year head-start on us.”

As he explains it, the Flowgroup’s business model was to maximize the electrical power output of their units, but that solution didn’t take off. Although Lai’s initial drive was to provide home owners with energy independence, now it shifted to generating heat first, power second.

“We’re not going to replace the utility, we’re simply supplementing a home’s power supply,” he explains. What they are offering is a product which will be resilient enough to provide a self-sustaining heat source for homes in the case of power failure, and do it efficiently.

“Our solution fills a gap,” says Lai. “Resiliency is a key value proposition, but there are other benefits as well. Because the unit is generating electricity when it’s operating you’re not buying that power from the grid, so depending on where you live there are potential utility savings if you’re using lower-cost natural gas to offset high-priced electricity.”

The unit, called the i2, is attached to a microgrid, consisting of a battery (that is required to start it up), a bi-directional inverter/charger, and a sub distribution panel in the home. The electricity the unit generates, while powering itself can also run hydronic pumps or an air handler while also recharging its battery.

As for heating output, the unit is rated for 13 to 14 kW units, which is around 45 kBtu/hr. Lai acknowledges that it’s on the low end of the typical heating output range, saying one unit will suffice in a home that is within a certain square footage and quite air tight, but if you have a 4,000 sq. ft. house, you’re into two units. 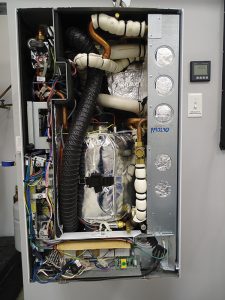 The iGEN Technology i2 unit is a self-powering gas-fueled (natural gas or propane) condensing heating appliance with around 95% optimal efficiency, using PVC or CPVC venting.

As of the fall of 2020 the company had some 20 units installed in a testing capacity with remote monitoring attached. This winter (2020-21) is the second heating season for installed units.

“We’re learning from these early adopters, and that’s what’s allowing us to refine our next generation of products,” says Lai. The next units being worked on are combi heating systems, providing both space heating and domestic hot water (DHW). Those units would provide supplemental electricity not only during the heating season, but year-round with the hot water supply.

While some other companies in the heating market are developing and marketing CHP products, they are primarily for larger commercial or light-industrial applications where the focus is more on the electrical output.

“We see this as an emerging market with only a few small players now, but we believe it will become more important,” says Lai. And as the company tries to broaden its reach, they know there are challenges ahead. “We understand it’s a premium product, and it’s going to be priced higher than even your most high-end boiler, because it’s doing more,” he says.

One of their challenges is educating the market on what they have. They’re working to educate home builders on the product, and they’ve co-authored a standard with UL because it is a whole new class of appliance.

Another potential challenge going forward is the long-term market shift towards electrification. Across the country, governments are promoting heat pump technologies and moving away from fuel-burning units. But this is where Lai believes iGEN can help the market.

“We know for temperatures below -15C or so heat pumps require additional electric resistance heating, which drives up cost and decreases efficiency. Yes, we are a gas-burning appliance, but we can replace inefficient water heating and provide supplemental heat for a heat pump that can’t keep up on colder days.

“The people we’re speaking with—whether it’s the government, utilities or even other HVAC appliance manufacturers—we are saying, ‘We’re a bridge technology, an enabling technology between where the industry is today and where it wants to get.”

He believes that as a small company, iGEN has a good sense of where the market is headed and what people want. “We just need the big boys to recognize that we’re on to something, and to see how we can help.”

In addition to its micro-CHP appliance, the company is also a Microsoft partner and is working to develop an HVAC IoT platform. They’re working on cloud-based algorithms to optimize and bring advanced intelligence to many HVAC platforms. This Canadian company is working on solutions it believes will eventually elevate the entire HVAC industry into the high-tech field. <>